Bill Kopp: For the last decade, you’ve been releasing your albums on your own label. Do you feel like that gives you greater control over the music, the marketing, those kinds of things?

Bobby Rush: It’s good for me, because now I’m in a position where I can record what I feel I want to record. Before that time, I was doing what other people wanted me to do. When I was with other record companies, most of the time I was doing what they wanted me to do. It was if they were the smart people, and I didn’t know what the hell I wanted to do or needed to do. And I thought, “How come they’re to smart but I don’t know what I want to do?” 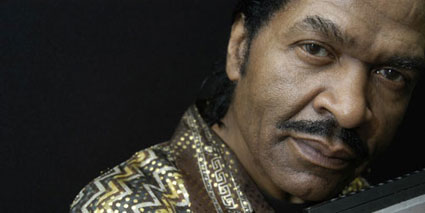 BK: You’re a pretty prolific artist; you don’t seem to have any trouble coming up with new material for an album every year or two. What gives you inspiration?

BR: I can’t say what give me inspiration, but I can thank God for giving me enthusiasm. I’m still enthused about what I do. And it’s my prayer that I keep that enthusiasm. A man can live a long time without water or food. But he can’t live very long without hope. I have hope.

Looking around and seeing other people my age and older, I learn from their mistakes. I don’t worry about the things I can’t do; the things I can do take care of themselves.

BK: When you’re writing songs, do you start with a riff, or a melody, or do the lyrics come first?

On Down in Louisiana, there’s some nitty-gritty kind of sound, but the content of the stories are plain ol’ Bobby Rush.

BK: Do you have live dates, a tour, coming up?

BR: Yes. You can go to bobbyrush.net for that info. [Note: at the time of our interview, and at publication time, the site was inactive, but we’re told it will be up “soon.” – bk] I have maybe forty, fifty dates scheduled at this point.

BK: If you play anywhere close to Asheville, I’ll come see you.

BR: Thank you. I have a song I recorded abut ten years ago called “A Man Can Give it But He Sure Can’t Take It.” When I come to town, I’ll invite you out, and I’ll sing that song for you.

BK: What’s next for you after that string of dates?

BR: I have a new single that Dr. John and I did. We’ve been friends for a long, long time. We’re both from Louisiana. It should be out in September or October. It’s about the tragedy in New Orleans. I think it’s a good record; we’re all finished recording it, but we still have to mix it.

Let me say before we finish: I want to thank you for what you’re doing and what you plan to do. Because people like you make it possible for people to know about what I’m doing. And I appreciate it.

BK: Thank you for the music.

BR: You’re welcome. I will do what I can as long as I can. I know there will come a time when I cannot do, and I don’t want to regret what I did not do.