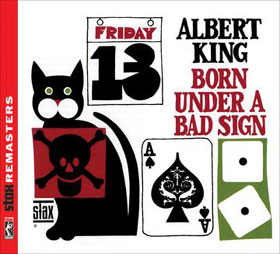 Here’s one often reliable method for discerning whether an album is an important one: when you first hear it, do you recognize several of the songs via popular cover versions?

I didn’t grow up with the blues; I’m the product of a white, middle-class suburban family; any “ethnic” music I heard growing up in south Florida in the 60s (and Atlanta in the 70s and 80s) was mostly soul or r&b that had crossed over to the pop charts. But as my interest in (and knowledge of) rock music deepened, I started hearing a lot of cover material performed by some of my favorite artists. One of these was Cream‘s “Born Under a Bad Sign” from their 1968 double LP, Wheels of Fire. And another favorite LP of mine was released a year earlier: John Mayall’s Bluesbreakers‘ Crusade, featuring the first recorded work of Mick Taylor. That LP included “Oh! Pretty Woman.” And then in the early 80s, I saw Eric Clapton onstage for the first time, touring in support of his Money and Cigarettes album. That record included an old tune called “Crosscut Saw.” On the LP and tour, Clapton was backed by some members of Memphis legends Booker T & the MGs.

Which, finally, brings me back to my original point. In 1967, Stax Records released an album by blues legend Albert King, a record called Born Under a Bad Sign. The formidable guitarist/vocalist was backed by all four members of The MGs, (on selected tracks) by one Isaac Hayes on piano, plus The Memphis Horns. Born Under a Bad Sign might not have represented the first-recorded versions for all of the aforementioned songs, but King’s versions – original or not – certainly informed a generation of blues rockers to a great degree.

Albert King’s approach on Born Under a Bad Sign was something of a hybrid: the beefy, assured and (dare I say) macho stylings more common to the blues’ Chicago variant, coupled with the slightly more down-home Memphis approach. And it worked. The title track (written for this record by Booker T. Jones and William Bell) is taken at a measured pace, making it more menacing than it would be had it been rushed a bit. Clapton’s guitar work on Cream’s version (cut mere months later) is closely modeled on this version. “Crosscut Saw” is built atop a clickety-clack, loping drum pattern from Al Jackson, Jr. The vocals are oddly muted on this track; The Memphis Horns are out front, as is King’s stinging electric guitar.

A reading of the rock’n’roll chestnut “Kansas City” follows; while King’s version isn’t definitive, it fits well within the context of the record. “Oh! Pretty Woman” is a swaggering blues that’s every bit as heavy as anything Cream (or, later, Led Zeppelin) would ever hope to turn out. A King-penned original, “Down Don’t Bother Me” is built around a familiar blues pattern, but the alternating phrases – King’s voice, his single-note-at-a-time guitar licks – strongly recall the approach of another King, BB King. Again, The Memphis Horns provide sympathetic support.

“The Hunter” (a composition credited to most of the personnel present for the session, save King himself) sounds less like a blues and more like the sort of southern r&b Stax was known for in those days, but even in this context King sounds right at home. The tune’s Lascivious lyrics make it even better. He takes a rare turn at balladry on “I Almost Lost My Mind,” a c&w weeper more than anything else; but some jazzy flute work enlivens the tune and takes it in a very unexpected direction. “Personal Manager” is a come-on in the proud tradition, and features some tasty piano fills from Hayes. And when King tears out the song’s solo – one of the longest on the album — The Memphis Horns initially engage in a lively call-and-response with him. But eventually they give up; the indomitable King wins this round. (An amusing side note: the LP’s original liner notes – reproduced in this 2013 reissue on Stax/Concord – the song is described as “funk at its best.” Who am I to argue?

Isaac Hayes gives the 88’s a workout behind King and The MGs on “Laundromat Blues.” In fact (according to Stax historian Rob Bowman in his book Soulsville U.S.A.: The Story of Stax Records) it was this song that led to King being the first blues artist signed to Stax. He had wandered into Estelle Axton‘s Satellite Records on McLemore Avenue, trying to get a deal with Stax. Axton suggested he cut “Laundromat Blues,” and the single would become his second charting single ever (r&b #29).

Hayes returns to tickle those keys even more expertly on the slow, slow blues of “As the Years Go Passing By.” As on many of the cuts on Born Under a Bad Sign, the stereo separation plays off the dialogue between King and the horns. (Production “supervision” is credited to Jim Stewart, suggesting that Steve Cropper may well have been in actual charge of the session.) The original album wraps up with “The Very Thought of You,” the closest King comes to playing in “standards” tender crooner mode. When The Memphis Horns take their instrumental break, he implores them to “play it pretty,” and they oblige.

The 2013 reissue appends the original eleven-track’s running order with five previously-unreleased tracks: four alternate takes plus an untitled instrumental that’s essentially (and happily) a two-minute excuse for Albert King to tear into an extended guitar solo. A pair of liner note essays (one by Michael Point, from the 2002 reissue, plus a new one by Bill Dahl) provide the historical context for which Concord releases are justifiably known.

Born Under a Bad Sign is an essential addition to any comprehensive album collection that focuses at all on rock, blues or Stax r&b.