Album Review: The Coal Porters – Find the One 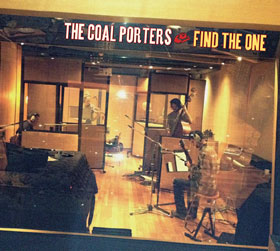 I have a friend who possesses a much wider range of musical interest than my own. Unlike me, she rarely concerns herself with such trifling issues as what genre best describes a particular act. And because – at least I tell myself this is why – she doesn’t spend the better part of her free time writing about music, she doesn’t concern herself unduly with questions such as, “Why do I like (or – much less often — dislike) this?”

And while I don’t always share her affinity for certain acts or styles of music, I often respect her opinion. And she sometimes returns that respect by taking me to task for expressing my dislike for some-or-other artist. And that’s fair enough, because if I can’t back up my point of view, I shouldn’t spend a lot of time expressing it in print.

Occasionally, though, I stumble across something that – at first glance – I “shouldn’t” like. When I say shouldn’t here, I mean that the music doesn’t fit into one of the categories or styles I generally enjoy. And when I think about why this is the case (because, unlike that friend I mentioned, I do think about it), I come to one or two conclusions: either (a) the music features large amounts of things to which I can relate (read: elements of rock music) or (b) the music is so wonderful overall that it transcends genre, even for a listener such as myself.

Now, maybe to someone who’s never listened to Sid Griffin‘s 1980s band The Long Ryders, the music of his current band The Coal Porters doesn’t sound especially rock-influenced. And it may well not be in any sort of overt, easily-identifiable way. Clearly, The Long Ryders always had a strong leaning in what might be labeled alt.country or Americana, though neither epithet was in wide usage in those days.

And maybe it’s because I recognize Griffin’s voice from those rocking tunes when I hear songs like “Barefoot on the Courthouse Lawn.” But I think there’s much more to it than that. Griffin (composer or co-composer of nearly all the songs on the new album Find the One) has always been rooted in popular song forms. So even though the instrumentation is firmly in bluegrass/newgrass territory (fiddles, banjos, mandolins) the songs really do transcend whatever limitations those narrowly-defined genres might seek to impose.

Maybe, too, it’s that The Coal Porters are based in the UK; as a result, perhaps they’ve imbibed some of the British folk influences – you know, Bert Jansch, Richard Thompson (the latter of whom guests on the record!) – that inform the kind of rock I like much more than American folk ever did.

Or maybe, in the end, I’m just guilty (once again) of overthinking the why and overlooking the what. The what in this case is a lovely collection of straight-ahead melodies that put the vocals and lyrics right out front, and that are fully textured with delightful instrumentation. The fiddle solos on tracks like “Hush U Babe/Burnham Thorpe” are every bit as thrilling in their own way as electric guitar solos. And Griffin and his bandmates aren’t afraid to push in both directions: there’s musical saw (you know, the thing from a toolshed) on “Gospel Shore” (it sounds like a Theremin) and a real sitar on an inventive cover of The Rolling Stones‘ “Paint It, Black.” The Coal Porters seem to find the latter song’s hitherto unknown ska roots, yet they make the song sound as if it had been written to be played the way they play it.

Throughout Find the One, the band’s use of Tali Trow on electric bass – rather than upright “doghouse” bass – helps warm the music for the ears of rock-centric listeners such as myself. Griffin trades (and/or shares) vocal duties with Carly Frey (violin), but all four members sing. And while the songs certainly aren’t comedy numbers, humor is a key ingredient throughout. What would you expect from a band with such a punning name, one who includes a notice on their sleeve notes that “No varmints or critters were harmed in the making of this album.”

It’s difficult to know if Find the One – or anything else by The Coal Porters – will end up serving as my entry point into a deeper appreciation of bluegrass-type music. So far I have largely resisted whatever appeal that genre has, though I live in a town fully immersed in it. But I think I’ll take this opportunity – just this once, mind you – to avoid over-analysis, and instead just enjoy a mighty fine album. My friend will surely like it, too.