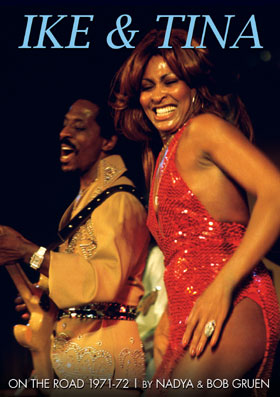 If I told you there was a new DVD compiled of a bunch of Ike & Tina Turner‘s home movies, you might well shudder. Thanks to Tina’s biopic What’s Love Got to Do With It, in the minds of a whole generation of potential music fans, Ike Turner is a bad guy, and not much more. Far be it from me to try and dispel that image; by all accounts his relationship with Tina was unhealthy and abusive. But if we can separate the personal from the musical – hell, Michael Jackson fans seem to be able to do so with ease – it’s worth noting just how important a figure in pop music Ike really was.

In any event, a new video titled Ike & Tina: On the Road: 1971-72 does provide a fascinating window into the duo at or near the top of their musical game. Noted rock photojournalist Bob Gruen and his wife Nadya toured with the Turners during that period, and documented all sorts of happenings with a back-and-white video camera (some later footage is in color). There’s a nice assortment of live onstage footage, though to many viewers the quality of those clips will bring the word “bootleg” to mind. But the Ike & Tina Turner Revue was never less than incendiary onstage, and that comes though in these clips, despite any technical shortcomings.

The home-video sections are, to put it plainly, odd. A long segment shows Tina in the kitchen, preparing a meal. While she does it, she tells stories about her daily like. A casual viewer might not even realize that this is the same woman who shakes her thing with abandon onstage; the scene’s humdrum domesticity is at great odds with Tina’s public persona. (Her hair does look like it did onstage; me, I always thought that was a wig.) When Tina ruminates about life for performers after middle age, it’s especially fascinating. More so in light of her subsequent career’s post-Ike second act.

Some of the studio and backstage rehearsal footage is very interesting, as it shows yet another side of Tina, one that’s rarely remarked upon. Her total command of vocal arrangements is on display here; she is shown working through the development of vocal parts for songs, and it’s clear that she knows exactly what she wants, and how to get it.

As was his wont, Ike doesn’t have a lot to say in these clips, either onstage or off. His presence fills the room whenever he’s there, and it’s difficult to know how much of that impression comes from what we’ve subsequently learned about him, or just via the heavy-dudeness that he exudes. There’s a particularly hysterical segment in the video that illustrates this: captured in the most lo-fi manner possible (Gruen pointed his video camera at a television set), we see Ike and Tina perform on Johnny Carson‘s Tonight Show. On the couch after the musical number, Tina goes on and on for several minutes about something or other. Never missing a beat, Johnny interrupts her, leans past her and deadpans to a stonily silent Ike, “Ike, can you keep it down over there?” It’s a classic of comic timing.

The entire video runs about 80 minutes, and productionwise it’s little more than a stringing-together of these various (but all interesting) clips. There’s no narration, nothing in the way of narrative arc; nothing like that at all, in fact. But Ike & Tina: On the Road: 1971-72 is a good mix of fly-on-the-wall cinema vérité dialogue, backstage all-about-the-music work, and onstage fireworks.