In one sense, the Long View Center is an ideal venue to catch a show: unobstructed lines of sight, comfortable seats, and – best of all – a building purpose-built for good acoustics (it was originally constructed as a church). However, it’s certainly not the most rock’n’roll of places: the lighting is designed to provide even, white light across the stage. So the end result is something that feels like a coffeehouse gig.

When it comes to The dB’s, however, it’s not about colored lights and fog machines, anyway. The band – with its original lineup reconstituted and augmented – has always been about the songs, about the performance. And from my second-row seat, I was able to witness all of that up-close. The Long View wasn’t packed to capacity, but it was a good-sized crowd. (Hopscotch attendees had more than a dozen other shows to pick from during the dB’s time slot.)

Guitarists Peter Holsapple and Chris Stamey led the band through a set that showcased roughly half of the songs from their latest album, Falling Off the Sky (a strong contender for Musoscribe’s Best Album of 2012), but they also dug deep into their back catalog. Introducing “Love is For Lovers” off of 1984’s Like This (an album from the era during which Stamey was no longer in the group), Peter asked the audience, “You do have this album, right?” (Generally stony silence was the reply, but I have a copy.) They also thrilled hardcore fans by pulling out what Stamey described as “a song from our first set list,” the late 70s underground powerpop classic “(I Thought) You Wanted to Know.” If you closed your eyes, it was ’78 again.

In fact few in the crowd seemed familiar with the band’s music, whether current or catalog. But that didn’t stop the group from earning rapturous applause after each and every number. Drummer Will Rigby – an astonishingly forceful and steady drummer; more so even than the records would suggest – took the spotlight for his own “Write Back,” a highlight of the consistently excellent Falling Off the Sky.

The stomping “That Time is Gone” got a highly charged reading, and throughout the evening Holsapple and Stamey took turns at lead guitar. It was remarkable to see and hear the difference between this show and a set I attended a few years ago during the tour promoting the Holsapple/Stamey hERE aND nOW album; all of the subtlety of that tour remained, but The dB’s delivered it and backed it up with a clear rock’n’roll punch. 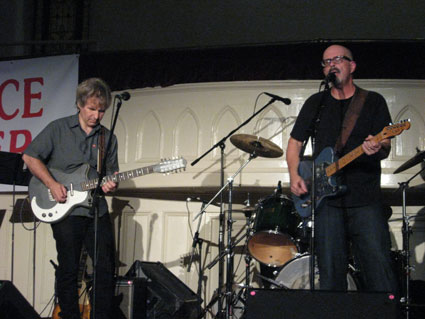 Gene Holder (or, as one online commenter ironically dubbed him, “Smilin’ Gene”) held down a solid bass line throughout the evening, and actually did let slip a broad grin (in response to an off-mic comment from Holsapple) at one point during the set. An auxiliary keyboardist added some texture, and helped re-create some of the more involved arrangements from the new album’s songs. Toward the end of the set, a brass trio came onstage adding – at various points – flute, trombone, saxophone and trumpet. Their presence allowed the dB’s to faithfully recreate the prog-epic of Stamey’s “The Adventures of Albatross and Doggerel,” and Rigby’s psychedelic drum fills on the song evoked sonic images of 1967.

The band-plus-horns closed with what Holsapple called their “hit in Philadelphia,” the upbeat “The Wonder of Love.” Likely owing to the restrictions of the venue (and the lateness of the hour), there was no encore. I later learned that the band did a previously-unannounced set the following afternoon.

Even if this show had been just-okay, it would have made my entire trip to Raleigh worthwhile; as it was, Holsapple told me afterward that it had been one of the band’s best shows.