A lot of what passes these days for new and cutting-edge (i.e. “indie”) music has among its hallmarks a breathy, somewhat emasculated vibe. As I like to say, it Does. Not. Rock. Or, it’s such a mishmash of previous styles that it ends up with little personality of its own. Yes, I know that my saying that hopelessly pegs me as an Older Guy™. So be it. In fact when I attended a recent concert date (at Asheville’s Orange Peel) featuring a band called Delicate Steve, my advanced years were set in stark relief to the youngish crowd. (Though not as starkly as at the previous night’s Orange Peel show, where Los Campesinos and Yellow Ostrich attracted a crowd so young that the poor staffers working the bar had little to do all evening.) 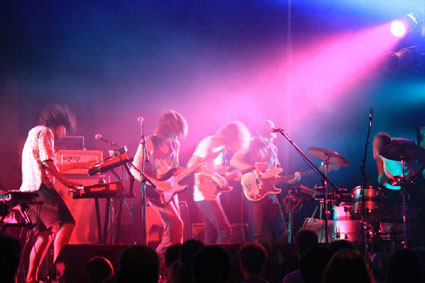 Hearing Delicate Steve (a band, not a guy) on their 2011 release Wondervisions (a copy of their latest – Positive Force – is reportedly en route but hasn’t arrived as of press time), one might expect their live presentation to be a bit fussy, slightly navel-gazing, and a tad on the quiet side. And while there’s not a thing wrong with any of those characteristics (in and of themselves, at least), none of them were in evidence this night at the Orange Peel. Steve Marion (the band’s namesake) spent pretty much the entire time wailing on his Fender. The show was a rocking good time, and the band – billed as an opener for Yeasayer – held their own as the crowd grew. 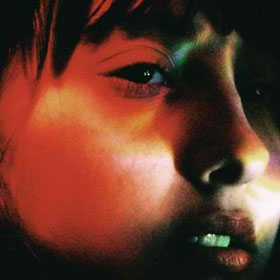 It’s safe to assume that most of the attendees (the house was eventually packed to near capacity) had come for Yeasayer. (Not me: I found Yesayer to be crushingly boring warmed-over 80s synth-pap. Not a typo.) And playing as an opening act is always a challenge under the best of circumstances. When a band is essentially (save a bit of vocal atmospherics) an instrumental act, it’s true that – all other things being the same – it’s even harder to win over a crowd, especially one unfamiliar with your music. But Delicate Steve stomped their way through their set, winning over a sizable portion of the audience in the process. Their sound isn’t especially reminiscent of any other band I can think of, and the one track of theirs that does sound a bit like another group – Wondervisions‘ “Don’t Get Stuck (Proud Elephants)” which sounds like an outtake from (of all things) Pink Floyd‘s generally-overlooked 1972 album Obscured by Clouds – wasn’t on the set list this night. If Delicate Steve’s music sounds like anyone else’s at all, it’s the guitar-centric numbers on Brian Eno‘s Another Green World. But even that similarity exists only in occasional places.

Much more high-energy than their studio efforts would lead one to expect, Delicate Steve’s hour-long live set was finely textured, melodic and heavy all at once. The spacier, dreamier side of the band wasn’t really showcased, but that dimension of their musical personality was subtly folded into the more upbeat live arrangements. Concentrating more on guitar-centric numbers from the new album than the more synth-based cuts from Wondervisions, the band presented a this-is-where-we-are-now set. In general, instrumental bands have a hard time shifting units and/or building a substantial fan base, but Delicate Steve may be the rare act that proves to be an exception to that so-called rule.