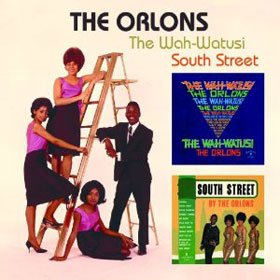 Another in the current series of re-releases from the Cameo-Parkway vaults, this Orlons twofer The Wah-Watusi / South Street is a delight. More than simply a smooth R&B-pop vocal group, the Philly-based group had three female vocalist plus a male singer. So they had a versatility that many vocal groups lacked. They could cover a sweet ballad “Dedicated to the one I Love” as well as a 50s-styled rocking tune like “Tonight.”

While the vocals are up-front on these recordings, the band is tight and inventive, if staying in service to the music. (No long instro solos here, but then this was the early 1960s.) Some of the songs are thin rewrites of other pop hits (“Mashed Potato Time” is little more “Please Mr. Postman” with different words) but there’s something in each tune to make it worthwhile. In the case of “Mashed Potato Time” it’s a brief (but loud!) honking sax solo.

The clear high vocal notes of “The Plea” don’t break any new stylistic ground, but as female vocal-centered R&B vocal goes, the song’s nearly perfect. Try to listen all the way through its 2:10 runtime without swaying to that sultry beat.

Gimmicky songwriting was the order of the day in 1962, so it’s against that backdrop that a number like “Gravy (for My Mashed Potatoes)” must be judged. It’s a fun tune with another lovely sax solo. A crisp rhythm section cedes the attention to the vocal but does its job admirably. Keeping with the dance-craze theme, the title track of the first album included on this single-CD set (“The Wah-Watusi”) is catchy even if its lyrics offer little clue how to do the dance. And yet another great saxophone solo.

The music never strays far from V-III-I-II or I-IV-V, but then it shouldn’t.  The simple tunes were designed as vehicles for the close harmonies and clear, easily-followed lead vocals. And throughout the two dozen tracks on this CD, that goal is consistently met. “I Met Him On a Sunday” comes close to not even having a chorus, but it isn’t missed.

The second album included in the set, South Street (actually the group’s third record) finds the group hewing pretty close to the previous album’s formula. The biggest change is the debut of Stephen Caldwell’s vocal gimmick, his “frog” voice. And while it’s cute, it does wear on the listener quickly. Caldwell obviously had more range than the vocal gimmick displayed, but that was the ticket to shifting units, so that’s the direction the Orlons took on South Street.

The straight vocal numbers featuring the female singers – numbers like covers of “Mister Sandman” – find the group moving away from straight R&B vocal toward more middle-of-the-road pop. But there are still interesting things happening in the background: the group’s version of “Charlie Brown” features an infectious jazz piano lick that’s much cooler than the yakety-sax licks on the Coasters’ version. And the joyous gospel-party hybrid “Gather ‘Round” sounds like what Phil Spector might have come up with if he had been limited to a handful of musicians.

“Between 18th & 19th on Chestnut Street” shows the group loosening up more than usual. One of the female vocalists lets loose a growl on the break, and the band plays with a loose, end-of-evening feel.

Like all of the other recent Cameo-Parkway reissues, these two Orlons LPs have been long out of print and unavailable. ABKCO — the Allen Klein-headed company that owned the masters – certainly kept them safe and sound. The transfer quality of these recordings is nothing short of amazing.

Gene Sculatti’s liner notes are informative, but offer little in the way of information about the musicians. Like the records, the focus is on the vocalists. The Wah-Watusi / South Street is twenty-four songs – each and every one of ‘em two minutes plus change – of fun vocal R&B.