NOTE: In 2009 Noble Rot reissued three of Julian Lennon‘s albums. They didn’t reissue the Valotte debut, nor did the put out a new release of Photograph Smile, Julian’s 1999 album (and arguably the finest work he’s produced). Instead, this new label — in keeping with its reputation for unearthing underappreciated albums from the 80s and 90s such as those by Toy Matinee and Marc Bonilla — released digipack versions of The Secret Value of Daydreaming (1986), Mr. Jordan (1989) and 1991’s Help Yourself. Here’s the fourth in a series of five reviews. 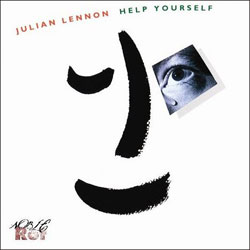 In 1991 — five years after releasing Mr. Jordan — Julian Lennon would return with Help Yourself. Working with the estimable Bob Ezrin as producer (Pink Floyd, Alice Cooper), the album kicks off with an ambitious number, “Rebel King.” The vocals in particular sound as if Ezrin brought along the female chorus from a Pink Floyd session. What’s more, lead playing from Steve Hunter (Alice Cooper, Lou Reed, both past Ezrin clients) adds to the bombast in a pleasing way. Julian’s voice still heads for the low notes at times, but here –unlike on the last album — he doesn’t sound like David Bowie. Not at all.This very promising start is followed up by the disc’s highlight, “Saltwater”, a song that explores Julian’s environmental concerns. The Mellotron flutes and strings don’t hurt, either. These slow-to-midtempo pieces — likely written on piano — are truly Julian’s métier. “Get a Life” — despite co-composing credit by Squeeze‘s Glenn Tilbrook — starts out sounding like a rock version of the verses from John Lennon‘s “Give Peace Chance”. But then the chorus kicks into gear and sounds like…Julian Lennon and Squeeze.

On Help Yourself Julian would work more closely with his original musical cohorts, as well. Justin Clayton cowrites a few songs on the album, including “Maybe I Was Wrong,” another track hinting at a return-to-form approach. Overall this album finds Julian on firm footing and on the right track, asserting his own style and/or assimilating his influences into something cohesive. The title track sounds modern and pleasantly classicist all at once. “Listen” features a dated arrangement, with its brittle, sterile Yamaha CP-70 piano bed and gated-reverb drums, but musically it wouldn’t be out of place on Valotte. The soaring “Other Side of Town” marks Julian’s first recorded duet, featuring nice vocal work from the Blue Nile‘s Paul Buchanan.

But “New Physics Rant” proves that Julian is capable of severe missteps like anyone else. Here he sounds like Mr. Bowie again, and he (sort of) raps. A Girl Scout troop guests on vocals. They don’t need no ed-u-cay-shun. Presumably we can blame Ezrin for this one; he did co-write the track, after all. The album wraps up with a real oddity: a track in which Lennon had no hand in composing. And it’s pretty awful; it bears no sonic relation to anything Julian had done before, and didn’t — we could hope — point the way toward a future direction. “Keep the People Working” sounds like nothing so much as one of the “songs” from Stomp. Bo Diddley is spinning in his grave.

And that would be it from Julian for nearly a decade. Lennon did co-write “If You Want the Sun to Shine” with Pat DiNizio for the Smithereens‘ Blow Up album, but other than that he got on with his life.

Any survey of Julian’s work that doesn’t discuss Photograph Smile does the man a terrible disservice. I’ll take a look at that one — his last release to date — next.