Blast From the Past: Julian Lennon – Photograph Smile

Here’s the final of five reviews covering the recorded work of Julian Lennon to date. 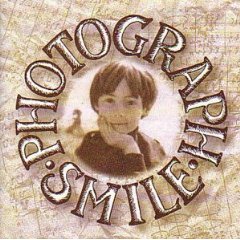 In 1999 — eight years after his last album Help Yourself — Julian Lennon quietly staged something of a comeback, albeit one than hardly anyone heard. Similar in that sense to Badfinger‘s ill-fated Wish You Were Here, Julian’s Photograph Smile finds him self-assured, freed from whatever pressures being on a major label exerted upon him. Plus, he was pushing forty. And as any good therapist can tell you — and as Julian’s dad poignantly wrote — life begins at 40.

On Photograph Smile Julian takes more command over the proceedings, seemingly paying heed to all he’s learned through his years of recording. For the first time, he’s credited as co-producer. His choice of musical collaborators includes Robbie Blunt (Robert Plant et. al.) on guitars, plus old friend Justin Clayton. Highlights abound on this, his finest record to date. The opening track “Day After Day” is a strong pop number that evokes much of what was good about late 1960s music; the tasteful string arrangement suits the songs perfectly. “I Don’t Wanna Know” (no relation to Valotte’s “I Don’t Know” or Mr. Jordan‘s “I Want You to Know” or even The Secret Value of Daydreaming‘s “You Don’t have to Tell Me” or Photograph Smile’s “I Should Have Known”) is a Britrocker in the tradition of, well, a lot of what was on the Beatles‘ Yesterday…and Today LP. It’s an infectious, catchy rocker with a memorable hook; if Julian had released this on an earlier album, he well might have gotten a hit. The clean, spare arrangement of “How Many Times” is a true contrast from Julian’s sometimes overproduced earlier material, and the song features a strong melody. Throughout the record, the players sound more like a band and less like hired hands.

Instrumentation is consistently interesting on Photograph Smile. Bouzouki, slide guitar, tabla, and electric sitar are all used to great effect; they’re critical ingredients rather than pasted-on gimmicks. “Crucified” is Julian Lennon’s musical visit to Kashmir, and it’s a convincing one at that. The waltzing “Good to Be Lonely” is a fetching, intimate tune that ranks among Julian’s finest moments on record; it’s sort of Julian’s answer to “In My Life”. The slide guitar that opens “And She Cries” is unmistakably influenced by George Harrison; if the liner notes didn’t indicate otherwise, you’d seriously wonder if it was him.

And the other songs are damn fine as well.

Throughout Photograph Smile, Lennon sounds self-assured, as if to say, this is who I am and what I sound like. Photograph Smile is a criminally overlooked record. At fourteen tracks, it’s his longest album, and there’s not a weak track in the bunch.

As of this writing (October 2009), Lennon has just released a single track online. The track, “Lucy”, is dedicated to the memory of a childhood friend who died recently. Julian’s childhood drawing of his classmate was the inspiration for John Lennon‘s “Lucy in the Sky With Diamonds.” Julian promises a new album called Everything Changes — his first in a decade — in 2010. Stay tuned.