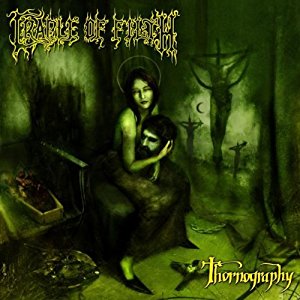 This is some very silly music. The first track “Under Pregnant Skies She Comes Alive Like Miss Leviathan,” comes in with a bombastic movie-soundtrack vibe, all robed-choruses and scratching cellos. Of course that’s all flown in, having little to do with the group. Yet it’s the best thing about the album. Think Metallica meets Dead Kennedys. Featuring lead “singing” that we’re supposed to think is straight from the bowels of Hell, in reality it’s merely cartoonish. Whenever decent instrumentation comes in — as in the bridge of “Tonight in Flames” — the stupid, stupid vocals ruin whatever marginal value might have accrued.

What a fucking waste of time. As Count Floyd of SCTV used to say, “Ooh…scary!” What utter bullshit. This reviewer can’t make out what’s being sung about, and the music doesn’t increase interest to the point of caring. A few lyrics did jump out of the painful mix…words like “blood” and “enemy.” Ooh. Now I’m interested (not).

The band does score some sort of anti-points for its silly-ass name: it takes some moxie to give yourself a name that evokes images of substandard daycare. Somebody call a social worker on these guys.

Fans of over-the-top riffery and brute imagery can do much better than this. These greasepaint clowns didn’t get the memo: the I-gargle-with-glass vocal approach has worn out its welcome. This listener cannot think of a less pleasurable musical way to waste an hour of one’s life. The disc’s only saving grace is that it could work as the soundtrack to some equally-inane video game aimed at trenchcoat-mafioso wannabes.