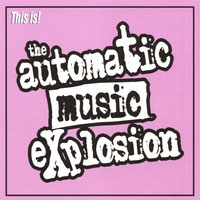 “We wanna play your high school,” announces their MySpace page.

This one gave me a real chuckle (and not the condescending kind, either). From the leadoff drum beat of “Take Me Home” (ripped from the Bay City Rollers’ “Saturday Night” and any number of sports cheers) to the faux-snotty vocals that recall Redd Kross, the four-song EP from Los Angeles’ (where else?) Automatic Music Explosion hits all the right notes. For fans of — for a lack of a better label — bubbleglam, you can’t do much better than this in 2008. In this decade, few groups would record an EP to use as bait to gain the attention of producer Mike Chapman. Chapman was responsible for the glammy pop of early 70s acts like Sweet and Suzi Quatro, and later worked with Blondie, the Knack and Toni Basil (among others). If any of those names elicit a guilty smile, you’ll probably dig this.

The brief This Is! disc sports songs of teenage lust, punctuated with cries of “yeah yeah yeah” and “1-2-3-4!” At first glance, the lyrics are powerpop-dumb. But this quintet is no bunch of idiots. Listen to the open couplets of “C’mon C’mon” for proof. They manage the neat trick of being innocent and filthy at the same time, recalling Eric Carmen’s work with The Raspberries. Yes, this stuff is retro, but it’s reaching back to a subgenre that isn’t terribly well-remembered (‘cept by fanatics like me) so it sounds as fresh as most of what’s served up these days. For fourteen minutes, it’s pure pop goodness. Keep your ears open for the Chapman-produced full-length.