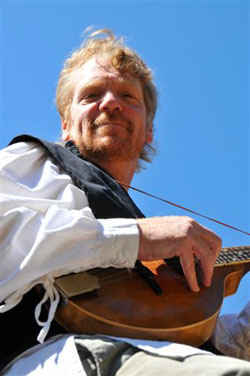 Peter Millis believes that there’s a strong musical connection between pre-Elizabethan England and WNC. His work with the Montford Park Players serves to illustrate that relationship.

Actor/musician Peter Millis got involved in drama as an adult playing and singing in an Appalachian drama called Way Back When. And although he’s played for friends, family and with other musicians, the Black Mountain-based performance was the start of Peter playing music onstage in plays.

Millis got involved with Asheville’s Montford Park Players (“North Carolina’s Longest Running Shakespeare Festival”) in 2004. His first role was as part of the cast of Henry IV Pt. 2. There wasn’t any music in that historical play, but eventually the Players staged productions that did call for music. Peter ably stepped up to help provide the live soundtrack.

In Shakespeare’s Much Ado About Nothing (performed by the MPP in 2007) there are a number of songs with words. For that play and several others, Millis wrote original tunes and melodies to go with those songs. Then he played them and sang them as the character Bathazar.

Sometimes music fits into Shakespeare’s plays, sometimes not. “The tragedies, for example, may have somebody singing — such as Ophelia singing as she drowns herself — but she isn’t doing it to the accompaniment of a lute,” Peter says. But in comedies, especially, the Bard has written songs. “When the director is looking for a way to present the songs,” Millis says there are “a number of options. Recite them as poetry, cut them out, or — when you have a musician in the cast — perform them live.”

Yet while Shakespeare wrote songs, he didn’t write music. Perhaps the songs were performed at the Globe set to the tune of popular folk tunes; no one knows for sure. In the same way that precious little stage direction exists within the plays, it is left to the modern director and players to interpret, to add their own vision. “In all of Shakespeare, all we can do is make educated guesses” as to the playwright’s intent, Millis says. “Anytime anyone’s singing Shakespeare’s words to a tune, they’re basically making it up.”

In many ways that’s a gift. “Making it up” allows the work of the Bard to remain fresh, to be redrawn in a way that speaks to the contemporary audience. “There is, if you pay attention to such things,” Peter explains, “a connection between Appalachian fiddle music as it’s played today and pre-Elizabethan folk music. It’s an art form, and these tunes have evolved over the centuries. We’re still performing songs that have pieces of Elizabethan lyrics in them.” He points out that the music is a “living tradition, and you can trace it straight back” to the British Isles.

The Montford Park Players will perform Charles Dickens’ A Christmas Carol again this holiday season. Their 2009 summer season will include A Midsummer Night’s Dream, Cymbelline, Macbeth and three more. Visit montfordparkplayers.org for details.