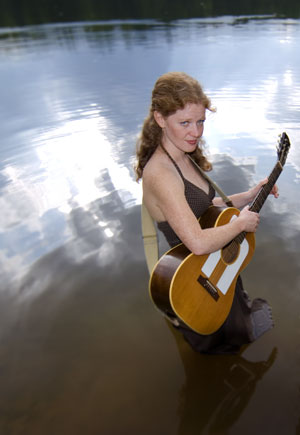 “I don’t remember not singing,” says folk/blues/jazz/Americana musician Eliza Lynn. “I remember being on the way to preschool, riding down Chicago’s Lakeshore Drive, making up songs.”

“It’s just sort of a way of being for me. I’ll be driving, waiting at a stoplight, writing songs about sittin’ on empty.” In fact, she explains, “I write most of my songs a cappella, in the car. And then I figure them out (on guitar or banjo) later. I have a lot of ‘crooked’ rhythms because of the way I write.”

Now skilled on guitar (acoustic and electric) and clawhammer banjo, Eliza grew up in a singing household, listening to folk, gospel, blues, and honky-tonk. As she got older, her tastes broadened to include world music.

“When I was in high school, I taped NPR’s Thistle & Shamrock radio show every week, and I danced to it all through the week until I could tape the next episode.”

“I’m a dancer, and I love variety. I think that to some extent I put my albums together from a dancer’s perspective. When I’m dancing, I need things to change regularly, to stay creative.” The songs on her albums move seamlessly from acoustic blues to 30s jazz-styled numbers, to gospel-inflected tunes, and back again. The variety reflects the spectrum of Eliza’s personality. “I really am a quiet person. And I really am a boisterous, loud person. And in between.”

By the end of some songs, I was trying not to cry.
–Eliza Lynn

Eliza studied Piedmont blues guitar style with acclaimed bluesman John Cephas. The morning of our interview, Eliza has just learned her beloved guitar teacher passed away hours earlier. The 78-year old guitarist “hadn’t been returning calls, and I knew something was wrong…” her voice trails off. A few nights later, onstage at White Horse Black Mountain, Eliza would pay moving tribute to her mentor in story and song.

Like many songwriters, composing is a form of self-therapy for Eliza. “When I have a feeling of being separated from myself, or broken, the songs are the glue, the stitching back of me.” She describes the situation leading up to the recording of the new disc: “I was in a deep depression; heartbreak, really. Writing and recording these songs made me feel whole.” She admits that during the sessions for her newest, Haven (official release date: June 2), “by the end of some songs, I was trying not to cry.”

There’s no record label pushing her to repeat the sounds of the last record for the sake of some marketing plan. “I’m totally an independent artist, so I’m free to do what I want to do. There’s a real freedom in that.”

Yet there are limitations to being independent. “Often there’s no support. The business that you can drum up yourself is what floats your career.” Her “Circle of Support” approach is the model she’s using to help keep her career moving forward. Album pre-orders by supporters, fans and friends can help finance recording production. It’s a method that allows musicians to operate outside the rigid confines of “the industry.” And outside is where Eliza’s most comfortable right now: “It would be intimidating to worry about what’s marketable. And for me, this music is me being myself.” 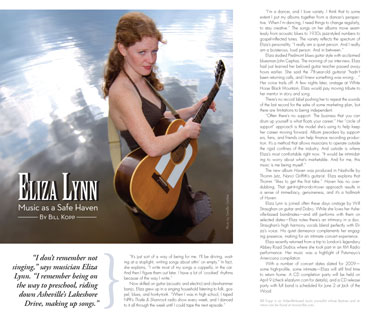 The new album Haven was produced in Nashville by Thomm Jutz, Nanci Griffith’s guitarist. Eliza explains that Thomm “likes to get the first take.” Haven has no overdubbing. That process — the sound-on-sound recording method pioneered in part by Les Paul — allows a musician to do many things, including correcting mistakes. But there’s a tradeoff, as the process can diminish the immediacy, the genuineness, of the performance. That immediacy is a hallmark of Haven.

In a move that combines the professional and personal, Eliza has temporarily relocated to Nashville. But her heart’s still in Asheville: “I love the people I play with here in Asheville. I Haven‘t put together a band in Nashville, because,” she looks around and gestures with her hands, “here’s my band.”

Yet, Eliza says, “there’s an intimacy in having only a duo.” She’s joined often these days onstage by Will Straughan on guitar and dobro. Straughan’s high harmony vocals blend perfectly with Eliza’s voice. His quiet demeanor compliments her engaging presence, making for an intimate concert experience.

Eliza recently returned from a trip to London’s legendary Abbey Road Studios, where she took part in a performance for broadcast on XM radio. Her music was one of the highlights of the recent Putumayo Americana compilation. With a number of concert dates slated for 2009 — some high-profile, some intimate — Eliza will still find time to return home. A CD release party (with full band) is scheduled for May 30 at Jack of the Wood; (check www.elizalynn.com for details).

A shorter, edited version of this feature appeared in the April 2009 issue of The Laurel of Asheville.