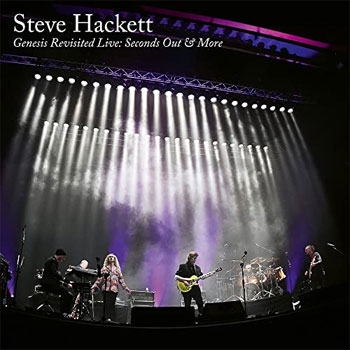 There’s a sizable contingent of Genesis fans that vastly prefers the group’s earlier work – its progressive era, so to speak – over the band’s later, more pop-oriented period. They’re far more interested in hearing epic works like “Supper’s Ready” than something like “Tonight, Tonight, Tonight.” And while there’s no denying the commercial appeal of the Phil Collins era, from a critical perspective, it’s the music of the days when Genesis was fronted by Peter Gabriel that is most likely to stand the test of time.

Either way, current-day (or recent-day) Genesis hasn’t been focusing on that material in its performances. Not counting the largely-disowned Calling All Stations album (which is not as bad as one might guess), Genesis hasn’t released any new music in over 30 years. Still, the most recent tour dates (featuring a seated Phil Collins) emphasized the pop side of the group. If you were a fan of, say, “The Knife,” you were pretty much out of luck.

Guitarist Steve Hackett left Genesis in 1977. His guitar playing was always melodic in the extreme, and it formed a critical part of the progressive-era band’s sound. He embarked upon a critically acclaimed career of his own, and eventually found his voice as a solo artist (literally: his once-tentative singing voice developed into an impressive instrument).

And Hackett’s solo material has been consistently compelling, skillfully balancing emotional content with impressive instrumental pyrotechnics. His solo material builds upon the creative foundation of his Genesis-era work, but doesn’t exploit it in any way.

That backdrop means that Hackett has expertly positioned himself as the torchbearer of Genesis’ progressive era music. And he has carried that role effectively and with class, integrating performances of the early material into his own sets. Unlike groups that tour solely on the strength of music they made a generation ago, offering nothing new, Hackett has it both ways. As do his audiences.

Home listeners have benefited from Hackett’s approach as well. In addition to his deep catalog of studio albums, Hackett has released quite a few live sets. Twenty of them, by my count. And several of those have been under the “Genesis Revisited” banner. The latest is a 2CD+Blu Ray collection called Genesis Revisited Live: Seconds Out & More.

As the title implies, the original Seconds Out was Genesis’ second live release. That 1977 double LP dated from the period when Collins was fronting the band, and it was the last Genesis release to feature Hackett. It focused on the progressive period of the band’s music, though, making it in many ways (at least with the benefit of hindsight) a best-of-both-worlds album.

So it’s fitting that Hackett would revisit that set list in the 21st century. After opening with a half dozen of his own best solo tunes, he and his superb band tackle Seconds Out in its entirety. The band is truly magnificent, treating the material with respect yet giving the music its own current-day character. The performances are close enough to the original to satisfy longtime listeners, and different enough to justify the set’s existence.

There are few musical experiences more thrilling than hearing Steve Hackett play that guitar solo on “Firth of Fifth,” and he does so here, channeling all of the original’s grace, power and majesty. In fact, the entire set delivers on that level. While he’s re-creating peak-period Genesis for the 21st century, Hackett is also working at the top of his game. Seconds Out & More is enthusiastically recommended.