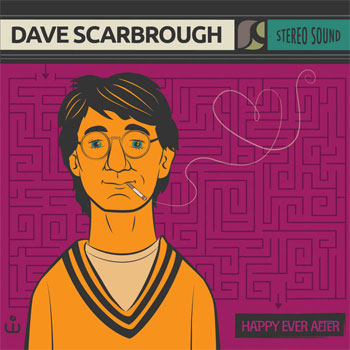 Even if I don’t recognize an artist’s name, if he or she is releasing music on one of a select group of labels, that’s enough to attract my attention. Trademarks of quality, one might say. Futureman Records is one such label, and so I was receptive when I received a CD, Happy Ever After by one Dave Scarbrough. The disc didn’t include the customary PR one-sheet, but that’s okay: I’m happy to let the music make its own case.

And it did just that. From the opening strains of “Catherine,” it’s clear that Scarbrough has and delivers the goods. Happy Ever After is filled with melodic, catchy rock with peppy hand claps, energetic musicianship and a knowing command of pop music values.

There’s nuance, too. Even in that first cut, Scarbrough shifts seamlessly between rave-up rock and subtle, baroque textures. It all works in a way that feels organic, ambitious without being pretentious. He’s clearly a student of Pete Townshend’s ‘60s work.

But the music doesn’t lean too heavily into one style; Scarbrough is no pastiche artist. He has his own sound. His approach bears some of the hallmarks of other artists whose work I admire (Material Issue, The Romantics, Matthew Sweet), but he sounds not a bit like any of them.

The music on Happy Ever After is almost unremittingly upbeat, and when Scarbrough does simmer things down (as on the title track and “The Coming Good”), it works every bit as well. His finely-tuned arrangements extract the maximum emotional content out of the sonics. This is an album worth returning to again and again, as it pays dividends to the attentive listener. Great, great stuff.