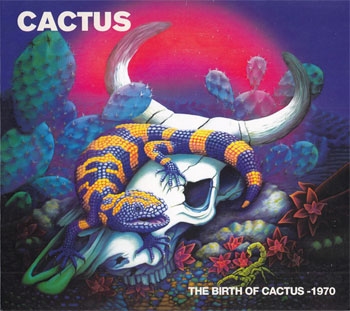 Cactus was part of the early ‘70s movement of hard-and-heavy rock outfits. Their sound had elements of the approach found in acts as diverse as Blue Cheer and ZZ Top. Growing out of the similarly heavy but substantially different Vanilla Fudge, Cactus featured the rhythm section of Tim Bogert and Carmine Appice, adding a pair of Detroit musicians, vocalist Rusty Day and guitarist Jim McCarty. The band came together after an aborted attempt at launching a Cream-style power trio with Jeff Beck failed to materialize. (Beck Bogert & Appice did finally get together later.)

The hard-charging boogie of Cactus was very much in fashion in those days. Released in 1970, their self-titled debut made it to #54 on the album charts. Though the band wrote much of its own material, the debut’s best-known tracks would be a cover of Mose Allison’s “Parchman Farm” and the single “You Can’t Judge a Book By the Cover,” a reading of the Bo Diddley classic written by Willie Dixon.

That LP landed in record shops in July of ‘70. But the band had been together since recording sessions the previous fall. Their first live performance took place in May, just six weeks before the record came out. It was recorded, but has not received official release until now.

The Birth of Cactus joins a comparatively large body of live Cactus recordings. The band’s Isle of Wight gig and many others have seen official release in recent years, and live recordings of later lineups have landed on the shelves as well. But the historical significance of this set makes it more worthwhile for fans of the band.

And as it happens, the sound quality is pretty good. Cleopatra and associated label Purple Pyramid have a sometimes dodgy track record where archival live releases are concerned; archival live sets from Captain Beefheart and others are borderline unlistenable; they’re essentially legitimized bootleg audience recordings. Sounding instead like a soundboard recording, The Birth of Cactus has a slightly flat feel, but that’s easily forgiven thanks to the performance.

Fourth-billed here at a Philadelphia outdoor show behind Jimi Hendrix, The Grateful Dead and the Steve Miller Band, Cactus is on fire. Their pile-driving approach to boogie-blues applies thunderous sonics to a six-song set that includes tunes that would surface on the group’s first three albums. McCarty’s speedy blues soloing is a hallmark of all the songs, and the rhythm section is propulsive. Day was a powerful white blues vocalist, and his performance here is engaging.

How one feels about blues played at maximum speed will determine their reaction to Cactus’s reading of “Parchman Farm.” The band careens through the tune at a breakneck pace, steamrollering over any nuance in favor of a crackling instrumental onslaught. Appice’s fills feel like machine gun fire; Bogert’s bass lines are fleet-fingered and intricate. McCarty’s squealing guitar is pummeling. And Day sings and plays harmonica in a manner that shows he can hold his own against the other three.

There’s nothing approaching subtlety here, but if you were expecting otherwise then you don’t know Cactus. If you like your boogie loud and proud, this document of Cactus’s debut performance is deserving of a listen.