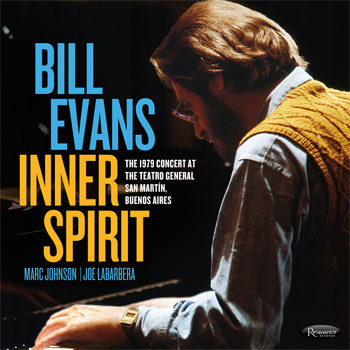 A week’s worth of coverage of new vinyl releases continues with the second of two archival releases from a jazz giant.

Bill Evans played Buenos Aires in 1973, and a recording of that performance has received legitimate release on Resonance Records. Six years later he was back again, for what would turn out to be the pianist’s final visit there; he died in 1980. That near-the-end set was captured in supremely high quality audio as well, and it too is receiving a sanctioned release. Recorded September 27, 1979, Inner Spirit is of a piece with Morning Glory, but different enough that fans of Evans’ work will want both.

To start with, the trio is different. On bass is Marc Johnson, and Joe Labarbera plays the drums. That rhythm section worked extensively with Evans in the final year of his life, and has been documented on no less than a dozen live recordings. And the song selection is distinct as well. Only Rodgers and Hart’s “My Romance” features in both the 1973 and ‘79 concert set lists.

A couple of left-field choices figure into the evening. Foremost among those is an initially-unrecognizable reading of Johnny Mandel’s “Theme from M*A*S*H” (also known as “Suicide is Painless”). In the hands of Bill Evans’ Trio, the song becomes a mere canvas upon which the musicians explore what one might characterize as impressionistic musicality.

In a nod toward his south American audience, Evans turns in a reading of “Minha (All Mine).” The other selections on this 2LP (or 2CD if you must) set include a customary mix of standards (“I Loves You, Porgy,” “Someday My Prince Will Come”) and newer material.

And speaking of customary, the uniformly high quality of Resonance releases continues with this set. Copious photos, ephemera, essays and track information are included. The CD version is lovely, but the vinyl configuration – available in a limited first-pressing run of 6500 – is truly the one to get.