Mdou Moctar Plays By His Own Rules

The digital age brought with it some fundamental shifts in music industry paradigms. Tuareg guitarist and songwriter Mdou Moctar was a beneficiary of those changes, leveraging them to catapult himself to prominence in his home country of Niger. More than a decade later, he’s signed to an established label and touring the globe with his distinctive music. He’s currently on the road in North America in support of the politically-charged Afrique Victime, his first release for Matador Records.

Moctar owes a debt to smart phones; years before any official release of his music, Moctar’s fans acted as something of a street team, sharing digital audio files of Moctar’s music freely.

“I didn’t have any control of it at all,” he explains through an interpreter. “That’s how it’s done in Niger. People didn’t really have access to the internet [in 2008], so [my music audio files] spread amongst people using cell phones.” The approach was a lower-tech equivalent of Napster. “If someone you don’t even know is listening to music that you like, you can just walk up to them and say, ‘Wow! I love it! Please send it to me.’” he says. “And they’ll do it immediately.” 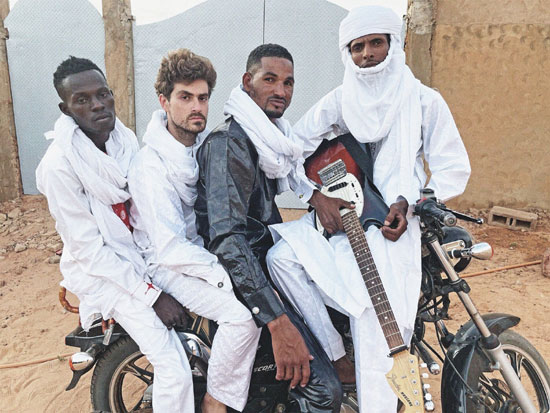 The guitarist’s music draws from Tuareg folk traditions and rhythms, but it doesn’t sound a great deal like what most would consider “world music.” Moctar’s songs have the power, energy and attitude of rock, but they’re rarely constrained by the rules – structure, tempo, meter – that govern most popular rock music in North America or the U.K. Westerners might perceive a psychedelic flavor to his instrumental approach, but that quality might have more to do with its hypnotic, freewheeling nature than anything else.

Tempos shift in mid-song. An extended guitar solo might be backed by a trance-like, one-chord drone. A loosely conventional melody might follow. And all of that could happen within a single piece of music. “I’m trying to transcribe what I feel deep inside me,” Moctar says, noting that he has no formal musical training. “So it makes sense for it to sound very strange.”

Moctar embraces that strangeness. And he notes that his music is perceived the same way, even back in Niger. “I do a few more modern things here and there, but most of the way I play guitar is traditional, using traditional vibrations,” he says. “But it still sounds odd – very odd, even – to locals. I know that my music sounds very weird; I love that. I want to be able to exist independently from the rest.”

He’s passionate and outspoken on matters of importance to him, and his lyrics convey that passion. The title track of Afrique Victime is the most ready example. “The lyrics of the song go, ‘Africa, a victim of so many crimes,’” Moctar explains. “I want to signal how our leaders — people who are supposed to provide political stability and protect us — are falling one by one, and the rest of the world isn’t reacting. Situations are getting worse by the day in Africa, and I feel like no one is talking about it.”

Women’s rights, religion, and Western exploitation of Africa all figure into the lyrics of Moctar’s original songs. “I’ve been talking about politics since I was a kid,” he says. “I grew up in a region where uranium was being exploited by France, so I did grow up with a hatred in me.” While his earliest music was largely apolitical, by the time of 2017’s Sousoume Tamachek, his lyrics had become pointedly topical.

And he broadened his worldview. “In the beginning, I was centering more on problems that were mostly impacting the Tuareg community,” Moctar says. “But then, with age, I understood that that wasn’t the right angle: it wasn’t only Tuareg people who had been oppressed. It really concerned all of Africa, and it was a huge problem.”

Asked if he comes from a family tradition that places emphasis on these weighty topics, he says no. “My family isn’t really involved with my creative process,” he says, pausing a beat before elaborating. “To tell you the truth,” Moctar says, “my family is a little bit afraid of the things I’m [singing about]. They say that I talk too much about colonization, women’s rights, slavery and terrorism. My parents don’t like me bringing these topics up, because they’re afraid for my safety.”

It’s fair to wonder if Moctar’s messages are getting through: though he is fluent in French and speaks English remarkably well, he chooses to sing all of his songs in his native Tamasheq language. He seems unconcerned that while Western listeners will certainly pick up on the inherent passion in his music, most won’t have a clue what he’s singing about. “I mostly want to get the music across,” he says.

For the rest of his message, he relies on journalists. “One thing that’s evolved in my career is [that] the journalists who are interviewing me help me to say everything I’ve got deep inside me.” Moctar explains that his music is merely the first step in getting his messages across. “My singing is just a tiny part of what I want to say,” he emphasizes. “Then, if my fans listen to the interviews of me and [read] the articles, they can really understand what my music is about, why I’m a musician, and where I come from. And I’m satisfied with that.”

Moctar has mounted several U.S. tours in recent years, growing his fan base by dint of hard work. The pandemic put a temporary pause to his globetrotting, but he’s back on the road now, with many of his U.S. dates — including a Folk Yeah! show at The Chapel on Sept. 28 — selling out. His 2022 calendar is already filling up with dates in the U.K. and Europe. And after releasing a succession of albums on Sahel Sounds, a small label focusing on music from West African artists, Moctar recently inked a deal with US-based indie label Matador.

Taken together, those steps are likely to help Moctar get his messages out. After gaining momentum thanks to cellphone file sharing of the early 21st century, Moctar is poised to take advantage of more modern tools to communicate his concerns. And he’ll keep doing it in the context of heady, unconventional yet alluring music.