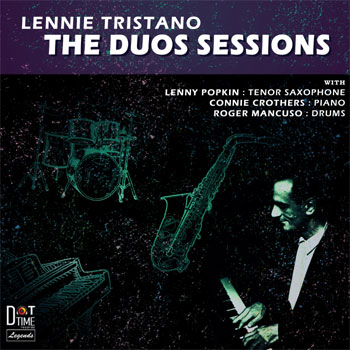 Strictly speaking, jazz is uncommercial music. Not that the artists eschew the possibility of commercial success; it’s simply that jazz is a specialist genre. From the perspective of sales revenues, it’s among the least popular forms of music. Of course that has precisely nothing to do with its quality.

And even within the genre, there are substyles that are even farther from the commercial end of things: free jazz, with its emphasis on improvisation and unrestrained expression, often does away completely with concepts like meter and melody. Tough sledding for the casual listener, to put it mildly.

Yet some artists are branded as outside the commercial sphere even when their music does have some tethers to conventional ideas of melody and such. One such artist is Lennie Tristano. The pianist-composer-bandleader’s recording career spanned 1945-76; he passed away in 1978 before reaching his 60th birthday. Tristano wasn’t terribly prolific in terms of releases; only a dozen or so albums featuring him as leader came out during his lifetime.

His later years were marked by a number of sessions in duo formats. Working variously with tenor saxophonist Lenny Popkin, fellow pianist Connie Crothers and drummer Roger Mancuso, Tristano cut a number of tracks. A sampling of those is collected on a new vinyl release, The Duos Sessions (There’s a CD version that includes nearly all of the LP’s tracks plus several more.)

Much of the music on The Duos Sessions weaves in and out of conventionally melodic framework, giving it a feel that has the excitement and unpredictability of an improv session, leavened a bit by some form and structure. On numbers like “Ballad,” Tristano spars with Popkin, for example, and they seem to exhibit an unspoken, subconscious level of communication. But they each take the opportunity to hold back at times, giving each other the space to engage in exploratory passages.

Thing get more challenging and abstract when two pianos are involved. “Concerto Part 2” is full of dissonance, with a malevolent and dramatic feel. In contrast, the numbers with drummer Mancuso swing, and while they’re still rooted in improvisation, they’re far from formless. Trepidation-tinged newcomers to Tristano’s work would do well to ignore the LP’s sequence at first, instead dropping the needle on the second tune on Side Two (the swinging and tuneful yet ambitious “Imagery”) and letting the record play from there. After they’ve absorbed that, they can dig into the more challenging material.

Jazz is uncommercial, and there’s nothing on The Duos Sessions that will convince anyone otherwise. But for the adventurous, it’s worth exploring.