I’m on record as being an ardent Fuzztones fan. And while the band has created plenty of music to satisfy fans’ cravings for garagefuzzpunk, those similarly inclined are apt to be interested in anything in and around the band. Happily, Fuzztone Numero Uno, Rudi Proudi understands and appreciates that fat. That, or he finds that his muse leads him in some extramusical direcitons. Hey, maybe both.

Point being, in recent years, Protrudi has seemed intent on chronicling his – and the band’s – story in book form. His latest is As Times Gone: 40 Years of Garage Grunge. Subtitled The Lysergic Legacy of the Fuzztones, this thick paperback volume (350pp+) is a lavishly illustrated compendium of reviews, articles, interviews and images chronicling the beloved band. 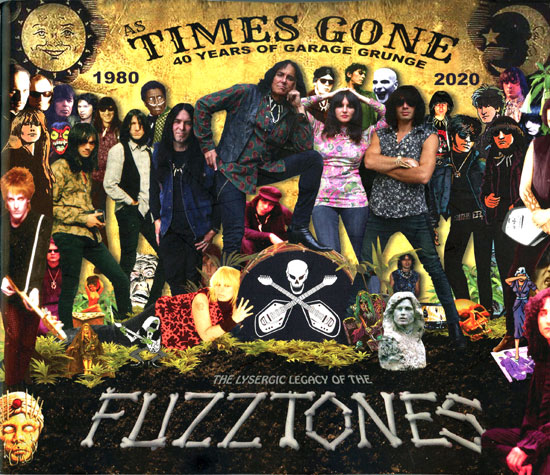 While it helps to have some working knowledge of the band prior to wandering into As Times Gone, it’s not strictly necessary. The words and pictures therein will hip you to what you need to know about the band, or they’ll at least provide the information that the music itself cannot.

Save for a one-page preface by Shindig! editor Jon “Mojo” Mills (and an equally brief introduction by Protrudi), the book simply presents reprinted (re-typeset) material that has appeared elsewhere. But since you’re not likely to have back issues of fanzines, magazines and since-deleted online publications, As Times Gone is your one stop shop for all of that.

The material is presented in roughly chronological order, though without any sort of table of contents, index or chapter division. As such, it’s perhaps best thought of as a words-and-images scrapbook, with Protrudi not so much its author as its editor.

The sheer volume of material contained in the pages of As Times Gone means that if it’s not an exhaustive account of the Fuzztones story up to now, it’s damn close. And thanks to the wide net that he has cast to collect the material – plus the fact that it’s been compiled by the man himself – it’s in every way both an authorized and authoritative companion to the Fuzztones’ body of work.

Now, go listen to the music.