Note: While perusing the newest book by the Fuzztones’ Rudi Protrudi, I made a discovery: a review I wrote more than four years ago has somehow failed to be published here on Musoscribe. So here ’tis. Come back tomorrow to read about his newest title.

Formed in 1980, the Fuzztones were on the crest of the garage rock revival wave. Though their records never sold in massive numbers, the band – originally based in New York City, but relocated to Germany – faithfully evoked the sneering sound of 1960s proto-punk. Today, founder Rudi Protudi and the current lineup of the Fuzztones have found a much more receptive audience in Europe than back in the USA. Protrudi has written and published The Fuzztone, a lavish, two-volume autobiography, subtitled Raisin’ a Ruckus and A Life at Psychedelic Velocity. 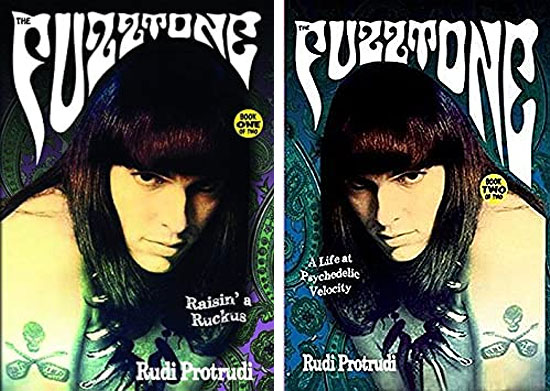 While many such books are short on content, these hardcover volumes are richly detailed in both word and image. Nearly every page – some 400-plus in all – features full-color graphics: concert bills, ticket stubs, advertisements, archival photos and more. And Protrudi (or, as he reveals for the first time in The Fuzztone, the man born Glen Dalpis) has a deft skill at storytelling; for a band that has largely flown well under commercial-market radar, the author has a fascinating story.

That story, of course, starts long before 1980. Protrudi is just the right age to have experienced the original mid-sixties American garage scene. Indeed he did, coming of age in a region he dubs (with equal parts disdain and good-natured teasing) “Pennsyltucky.” There he got his start as a teenage rocker, making music and mayhem in a manner that would preview the rest of his career.

The Fuzztone is filled with amusing, unlikely encounters: Leonard Cohen, Jerry Lee Lewis, Screamin’ Jay Hawkins and others. And the bonus Alive and Deadly CD – documenting a 1984 Fuzztones gig filled with covers that will be familiar to devotees of Pebbles, Nuggets and Back from the Grave compilations – serves as the perfect companion to Protrudi’s books full of stories and memorabilia.