Book Review: Shut Up You Animals!!! A Remembrance of Dirk Dirksen 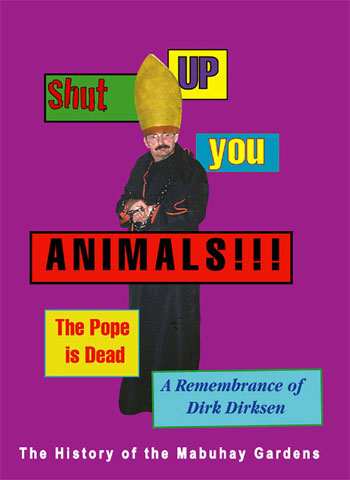 Dirk Dirksen wasn’t known as musician, but his importance to the music history of San Francisco is substantial. Imagine a sort of Bill Graham writ small, with a perhaps unexpected interest in (and affinity for) the then-new punk rock and new wave, and you’ll have the beginnings of what he was all about. Dirksen – indeed related to the exponentially more famous Senator Everett Dirksen – was the booking manager and emcee at the Mabuhay Gardens, a music venue as unlikely as Dirksen himself.

Mabuhay Gardens was a Filipino restaurant, not a concert hall. But in a move to squeeze out a bit of additional revenue during late nights when the kitchen wouldn’t have been open anyway, Dirksen stared booking bands. And as it happened, in that period – the middle/late ‘70s – there were a whole bunch of punk (and later new wave) bands who found it nigh on impossible to score gigs elsewhere in town. (Many would place the blame for that lack of opportunity at the feet of Bill Graham, who was, they’d tell you, no fan of the new music.)

Dirksen had a memorable persona. How much of that persona was rooted in his actual personality remains a matter of some debate, but most available evidence suggests that in light of his championing of the new music, a good bit of it was a put-on. Wearing funny glasses and a prosthetic penis on his nose, he’d call the Mabuhay audiences “animals,” and insult them as he encouraged them to go home after a show.

Speaking of proboscises, Dirksen had his broken on multiple occasions, often in one or another fracas with unruly patrons or dissatisfied musicians. But he was – in his own way – dearly loved by the scenesters of that period, who generally saw him as an ally. Had it not been for Dirksen, many of the bands in the Bay Area of that time might never had gotten the break they needed to move to the next level. In that sense, he’s of a piece with Aquarius Records’ Chris Knab and his business partner Howie Klein; the two launched 415 Records as a way to (a) support the local music community and (b) have fun. Actually, those two things were focused upon equally.

The Mabuhay closed some years ago. And as the story goes, many people encouraged Dirksen to write a memoir, autobiography or similar account of his own story. Apparently a publisher even fronted him a cash advance. But he only wrote a few hundred words, and then he died.

The Bay Area arts and music community rallied to complete the project, taking Dirksen’s brief written piece and exponentially expanding it into a book, Shut Up You Animals!!!: A Remembrance of Dirk Dirksen. The book is a messy yet wonderful oral history, jam-packed with photos, images and other ephemera right alongside astute and personal remembrances from the people who knew Dirksen. Some of them are well-known; others are names that will be familiar only to the denizens of the Fab Mab. But the crowd-sourced book is a loving and fitting tribute to a figure who deserves acclaim for his part in the San Francisco music scene.