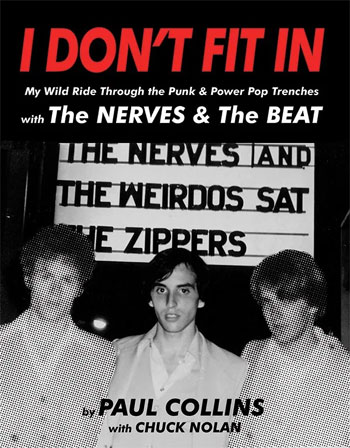 One of the finest among the so-called new wave bands of the late-late-late ‘70s and very early 80s (the subgenre’s peak period) was The Beat. Renamed Paul Collins Beat to differentiate itself from the similarly-named UK ska-rock band (renamed to the English Beat, the group led by guitarist Paul Collins made some compelling music that showcased the best of the style while deftly sidestepping the too-earnest vibe that characterized lesser lights in the power pop world. Featured on the various artists promo 45 EP Now Wave Sampler, “Don’t Wait Up for Me” is a stone cold classic.

In fact Collins had already been part of an important group even before launching the Beat. Though the Nerves didn’t experience much in the way of commercial success, the band featuring three gifted songwriters (Collins, Peter Case and Jack Lee) featured in them an embarrassment of riches.

Now Collins has written a memoir, I Don’t Fit In, chronicling his life up to now but with special emphasis on his times with the Nerves and the Beat. In large part, it’s an unflinching account of his experiences with his now-legendary band mates, and the book will help ardent fans who might wish for a Nerves reunion understand why that just ain’t gonna happen.

As Collins tells the story, Jack Lee – author of “Hanging on the Telephone,” a hit when covered by Blondie – is, shall we say, mercurial. His presence looms over the entire narrative of I Don’t Fit In, making occasional appearances in ghostly form (though he’s still alive) to comment on whatever is happening at that moment in Collins’ story.

It’s an odd but ultimately effective way to thread together the bits and pieces of Collins’ own story, and it underscores the point that just because some band made a bunch of songs you like, that doesn’t mean they could stand to be in each others’ presence. And wishing for them to get back together isn’t necessarily wishing them well.

I Don’t Fit In stakes out its perspective right at the start. I’m an egotist, Collins explains, notably without apology. And he doesn’t go out of his way to paint himself as a hero, a victim or an especially unsympathetic character. Instead he lays out his story with a minimum of editorializing, and not much mush self-pity or recrimination.

What he does do is tell an interesting story, albeit one with themes that will resonate as all-too-familiar for any musician who has tried to make a living though his or her art, only to find that the machinery of the “music industry” isn’t really set up to encourage that sort of thing.

I Don’t Fit In is jam-packed with photos and other visual ephemera that add to Collins’ narrative. It’s a well-written book that speeds along quickly on its historical journey; the photos scattered liberally throughout its nearly 275 pages help pump the metaphorical brakes, encouraging the reader to pause a bit from the narrative and take in the visuals.

Serious fans will likely be keen to read Collins’ account of the disastrous implosion of the Case-Collins tour of 2012. And that story is here, though it’s fair to note that while Collins presents his side of the story (it’s his book, after all), there likely exists a very different account if you’d ask Peter Case about it. Summed up, that episode was likely ill-advised from the start, seeing as the two men didn’t much care for each other to begin with; what did everyone think was going to happen?

Of course reading I Don’t Fit In is also likely to send readers back to their vinyl or CD collection (or, y’know, Spotify) to listen again to the Nerves and the Beat. And it also might encourage them to check out the wealth of material Collins has released since that time. For that alone, it’s worthwhile. But it’s a great read and succeeds on its own merits as well.