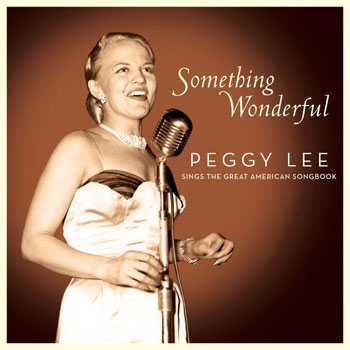 A casual listener might only be able to name “Fever” – and possibly “Is That All There Is” – but Peggy Lee scored a lengthy run of hit singles. The primary arc of her career ran from the early ‘40s (when she was the singer in Benny Goodman’s big band) through 1974, when she hit the top 40 for the last time with “Let’s Love” (a song written, arranged and produced by a fan of hers named McCartney). She didn’t really need help writing songs, though: Lee (born Norma Egstrom) wrote or co-wrote nearly 300 songs.

Still, the multi-talented singer-actor-presenter was an all-around star who reinterpreted the works of others. Like Sinatra, she made songs her own even when she didn’t have a hand in composing them. In 1951 and ‘52 she starred on her own radio show, often singing songs from the Great American Songbook. As a bonus, she often brought on the program as guests the men who wrote those tunes: Hoagy Carmichael, Matt Dennis, Frank Loesser and Johnny Mercer all appeared on her show.

A new 2CD set from Omnivore Recordings, Something Wonderful: Peggy Lee Sings the Great American Songbook draws nearly 40 songs from that WCBS program, grouped together by composer: Mercer, Rogders & Hart / Rodgers & Hammerstein, Cole Porter, Dennis, Carmichael, Loesser and more. Backed on those by top orchestras, Lee is featured on those as well as four of her own songs (including “It’s a Good Day” and “Whee Baby”). The collection wraps up with nine standards written by other composers not previously named.

Of the 39 tunes here, only two have been previously released, making this a serious archival addition to Lee’s body of work. You’ll recognize most of these songs, from Dennis’ “Let’s Get Away from it All” to “Lullaby of Broadway.” The audio quality is just fine, and the bits of dialogue scattered among the songs adds to the album’s charm. Joe Marchese’s detailed and thoroughly-annotated liner note essay places the material into the context of the period (and into the overall scope of Lee’s body of work).