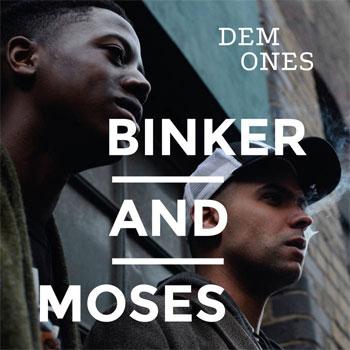 It take confidence to put together a musical duo featuring only saxophone and drums; there’s nowhere to hide, musically. There’s no traditional rhythm section to establish a foundation, no polyphonic instruments to craft a melody. But Binker and Moses – saxophonist Binker Golding and drummer Moses Boyd – make the most of the format. As might be expected, this isn’t tuneful, singalong music; it’s challenging stuff that requires active listening. But for those willing to take on something adventurous, Dem Ones is a fascinating listen.

In some ways the pieces sound as if the duo was playing some comparatively conventional extended pieces, and then they used the middle of the song as an excuse to head off in exploratory fashion. Oh, and then they edited out the conventional parts – -the head, if you will – leaving only the weird stuff.

If that sounds interesting to oyu, then by all means do check out Dem Ones. Its opening track, “No Long ‘Tings’ has those qualities in great amount. If, on the other had, it strieks as a gruesome and potentially unlistenable, then the music itself is likely to elicit the same reaction. “Man Like GP” is closer to the solo section on Sonny Rollins’ Way Out West, which is ot say that it’s a bit more accessible.

On “Black Ave Maria,” Golding gets some otherworldly texture out of his tenor sax; at first, it sounds more like a synthesizer. But the instruments on Dem Ones are wholly untreated; the LP sounds very muck like an audio verité document, with no sweetening or post-production of any kind. In fact, as the info on the back of the LP jacket tells us, the album was recorded straight to an analog tape machine, “without any editing, overdubbing or mixing.” For that alone it’s worthy of admiration. For those with a taste for the out-there qualities that define the free in free jazz, Dem Ones is a trip worth taking.