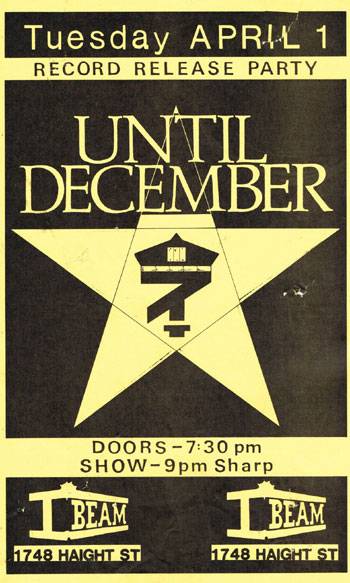 Work continues at a just-this-side-of-feverish pace on my upcoming book, Disturbing the Peace: 415 Records and the Rise of New Wave. The San Francisco record label helmed by Howie Klein really only existed for a comparatively short time: 1978 to 1982 as an indie, and then up until ‘87 as a Columbia/CBS-affiliated label. During its indie phase, 415 released singles and EPs by about a dozen acts. The label also put together a fascinating compilation LP, 415 Music, that captured a moment in the Bay Area music scene much the way that Standardeviation did for the Atlanta scene of the time (your favorite city may well have had its equivalent, too).

415 Music featured some bands who had cut singles or EPs for the label, but it also showcased a few groups who are otherwise undocumented or who would release music on other labels. Few would go on to become household names, but nothing on the compilation is an embarrassment. In fact much of it is quite good, and all of it helps to make 415 Music a worthwhile time capsule.

Klein’s label also released the debut (in fact only album) by synthpunk pioneers the Units, and – oddly enough – quite possibly the best album that former 13th Floor Elevators guitarist Roky Erickson would ever make, The Evil One. Romeo Void and New Orleans-based Clash acolytes Red Rockers also made their long-player debuts for 415.

The success of Romeo Void was likely the linchpin that helped earn the label its major-label arrangement with Columbia. The Columbia era of 415 would feature Romeo Void plus Translator, Wire Train, Red Rockers, and a band you’ve almost certainly never heard of, Until December. From my perspective, each of those bands made some very good (and occasionally great) albums.

The nature of 415’s deal with Columbia meant that the industry giant had first-refusal rights on acts Klein brought to them. If they passed, Howie could still release their records on 415, without the CBS affiliation. That arrangement led to the release of some quite-good EPs by New Math, the Uptones and Monkey Rhythm. No, you don’t know them or their music. Yes, you should.

Back to the project at hand. In the last 90 days (less than that, in fact) I have conducted more than 80 interviews. In addition to multiple conversations with the very patient Howie Klein, I’ve interviewed all four members of Translator, most of the musicians who were in Wire Train, two of the three members of Until December, two of the guys in Red Rockers, three people closely associated with Roky Erickson (Roky passed away a few years ago), and at least one member – often several – from every single act that recorded for 415 Records. That’s 29 artists. (Okay, one exception: one band that recorded a single has proven beyond my reach. But I’ve spoken to authoritative sources about them.)

I’ve also been fortunate to speak at length with journalists who covered 415 and the Bay Area scene of the relevant period, producers and engineers, publicists, key confidantes, label executives and some especially knowledgeable and insightful fans. A surprising number of them have opened their archives and provided me with photographs, contracts, correspondence, gig posters, set lists and other fascinating visual artifacts that help tell the story of 415 Records.

And now as the interview/research phase of the project draws to a close, I’m digging into the real work: writing the book. It’s remarkable how the larger picture has come into sharp focus through interviews: a random factual detail that might not have made sense – or seemed important – reveals itself to be a pivotal puzzle piece. Connections not even hinted at prove to be important and crucial to the overall narrative.

I’ll be delivering my manuscript to the publisher in June, and hope to announce a publish date soon thereafter. More info as things continue to progress.

Previous updates on the project: