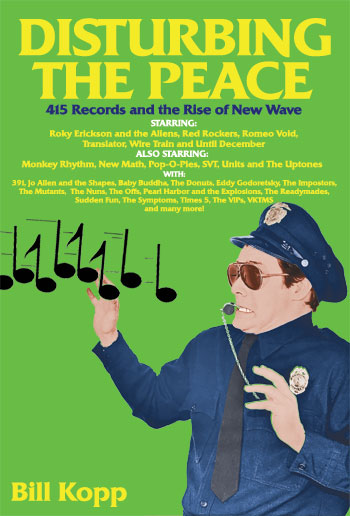 An early working version of the cover art

Last November I wrote a cover story for SF Weekly; it focused on a series of reissue/compilation CDs on the Liberation Hall label. Those releases contained music originally released on 415 Records, an influential and trend-setting indie label based in San Francisco in the late ‘70s and early-to-mid 1980s. Founded by Howie Klein and Chris Knab, 415 was at the forefront of new wave (and sometimes punk) or the era, and its early releases provided a tidy and representative cross-section of what was happening in the Bay Area.

For that feature, I interviewed several personalities relevant to the story. Those included Klein, Sally Webster of theatrical punk outfit the Mutants, Joe “Pop-O-Pie” Callahan of the irreverent Pop-O-Pies, Jonathan Postal of the Readymades, Eric Din of under-recognized U.S. ska pioneers the Uptones, and Jack Casady of SVT (and, of course, of Jefferson Airplane and Hot Tuna).

Those six conversations made it clear to me that the 415 Records story was a much larger – and more compelling — one than could reasonably be told in the space of 3000 words. Moreover, the label’s later period – a time when it had inked a deal with industry giant CBS/Columbia – featured some of my favorite music. On a personal level, the albums Between Two Words by Wire Train and Evening of the Harvest by Translator were the soundtrack of my senior year of college. And they remain favorites to this day.

Those two bands were among the handful of comparatively high-profile acts from 415’s Columbia era, joining Red Rockers (responsible for the hit single “China”) and Romeo Void “(“Never Say Never”). There were others, too: former 13th Floor Elevators guitarist Roky Erickson arguably created his most enduring work with 1980’s The Evil One, released in the U.S. by 415. And a little-known band called Until December combined synthdance and rock textures in a way that few others did.

In all, some 29 bands released music on 415 Records. Some did only a single track, or a two-sided single. A few made EPs. But all were significant in their own way. And their stories — as well as that of 415 Records — have yet to be told in a comprehensive manner.

That’s my job. Coming later this year courtesy of HoZac Books is Disturbing the Peace: 415 Records and the Rise of New Wave. I’m hard at work on the project right now, having completed more than two dozen interviews [EDIT March 9: now more than 70!] [EDIT June 9: now more than 95!], and with more than that many remaining. I’m speaking in depth with the artists, managers, producers, engineers, label executives and friends and fans whose stories come together to paint a picture of the 415 era.

I’ll be providing more info as things progress. It’s a very exciting project, and each successive interview serves to tie together the narrative in unexpected ways. Stay tuned!