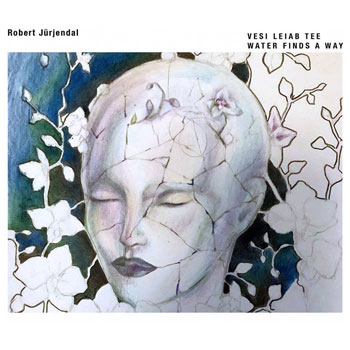 Keeping up with such matters as I do, I’ve learned that there are quite a few different ways of coping with the realities of 2020 and beyond. That’s especially true for creative types. Some have gone to ground; others are in full creative flower.

Estonian guitarist Robert Jürjendal is most definitely in the latter category. At least that’s the impression I’ve formed after receiving not one, not two but three new albums featuring his instrumental work. Once Only by Eternal Return and Noya Godwin Jürjendal’s Samliku have been reviewed elsewhere on Musoscribe. Water Finds a Way is billed as a solo album. And all are impressive enough – and different from one another – to warrant coverage here; that almost never happens.

As its title suggests, Water Finds a Way is a peaceful, placid, contemplative yet powerful work. The guitarist’s favored approach her involved lengthy sustained notes that recalls Rober Fripp circa “The Sheltering Sky” and/or his work with Eno. But the tunes are “prettier” than one might expect from a progressive-leaning musician, and more appealing and distinctive than the typical ambient approach.

This is most definitely impressionistic music, the sort of thing that can be enjoyed actively or passively. The spaces between the notes are effective, and the minimal instrumentation – bits of cello, wordless voice and piano – adds tone color without cluttering up the arrangements. Subtle dissonance creeps into “Hikers,” along with what sounds like a cross between a vibraphone and a guitar signal fed through a rotating Leslie speaker cabinet. Faraway guitar squalls suggest the desolation of Scandinavian winter on “On the Border of Sleep.” (At least to me they do.)

Elsewhere there’s gently shimmering acoustic guitar (“The Lake Freezes”), and soothing, hypnotic waves of guitar notes (“For the Bees”). There’s sometimes a melancholy air to tracks like “Grey and Blue,” but in general, the music exists as a kind of sonic canvas upon which the listener can imagine his her own emotional watercolor.