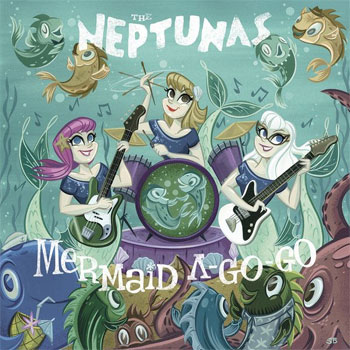 There’s something inescapably, relentlessly cool about surf rock. The style had its heyday in the early ‘60s, but it’s never gone away. And for good reason: there’s something irresistible about a strong signature melody, instrumental music so hooky that vocals aren’t even necessary. And when the vocals are employed, done right, they only add to the appeal.

The undisputed kings of latter-day surf rock are Los Straitjackets. I’ve seen them live many times, and they never, ever fail to delight. But until very recently, I was unaware that the genre has its queens as well: The Neptunas.

From Los Angeles – you might well have guessed that part – comes this trio: bassist Pamita Neptuna, guitarist Leslita Neptuna and Laura Bethita Neptuna on drums. The band formed in the mid ‘90s, but – after an extended hiatus – got a big break when the Breeders invited them to open on a tour.

Sure, to some extent you know what their songs sound like even before you’ve heard them. But the trio adds some important twists to the sold, established formula. All three Neptunas sing, and they add their appealing, chirpy pipes to about half of the songs on their new album, Mermaid A-Go-Go. And in their efforts they’re guided by the Daddy-O Grande of them all, Danny Amis. Working as producer and auxiliary musicians (baritone guitar, keyboards), he give the Neptunas a note-perfect production sheen.

The tunes are first-rate. Nearly all of the 15 tunes on Mermaid A-Go-Go are band originals, but the five covers are superbly chosen, and they reveal a lot about the group’s inspirations beyond the surf genre. The Kinks’ “Till the End of the Day” is played straight, but their cover of Serge Gainsbourg’s “Poupée de Cire, Poupée de Son” balances the ye-ye vibe with a surf feel. And they sing it in French!

Perhaps most interesting among the covers is “The Lonely Bull,” a tune best known as a Herb Alpert & TJB number. The Neptunas nail it, with some lovely wordless vocals adding just the right note.

For the most part, the arrangements are kept to the trio format, but some deftly-placed brass gives it a Wrecking Crew writ small feel. Leslita doesn’t show off on guitar, instead she leads by playing in a style that’s both economical and spot-on. Oh, and in possession of perfect tone; anything less would be a surf sacrilege.

The trio understands what makes surf rock durable more than a half century after its heyday. And thanks to their snappy songwriting – unearthing guitar riffs that are new and familiar at once – the Neptunas are keeping the genre alive as we venture forward through the third decade of this new century.