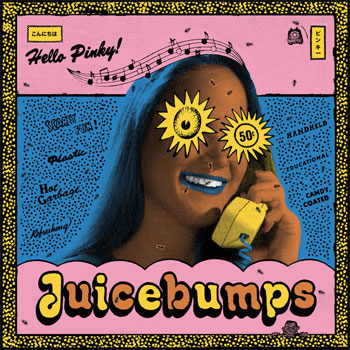 For listeners new to the sound of Juicebumps, the opening moments of Hello Pinky! make it difficult to sort out what the band is about. The brief “Scanner” features a melange of found sounds: a twisted radio dial reminiscent of The Ramones’ “Do You Remember Rock ‘n’ Roll Radio?”, a snippet from ‘60s sitcom Leave it to Beaver, and a cold war era public service message. Those random bits of audio eventually segue into “Wet Leather,” a punky, nearly-instrumental number with surf-n-spy textures reminiscent of Man…or Astro Man? Or early Devo.

It’s only toward the tail end of that tune that vocalist Parker surfaces (all four band members use mononyms), displaying a yelpy, aggressive vocal demeanor. And with those sonic elements established, Juicebumps have finally set out the musical landscape for Hello Pinky! The quartet’s approach is taut, speedy playing, with the vigor of hardcore, the bratty fun of pop-punk, and the hookiness of power pop.

Juicebumps even flirt with the sonic variety of experimental synth bands, folding insistent, nervy synthesizer textures into their musical assault. But at its center, the group is focused on guitar. In fact, the powerful axework on “Fraidy Cat” is vaguely redolent of late ‘70s Cheap Trick. But throughout the record, Spencer’s bleeping synths engage in nervy dialogue with Luca’s bass and Nick’s drums.

The lyrics of “Smalltalk” consist of a lengthy succession of two- or three-syllable comments, the sort of things that might show up as comments on a Facebook or Instagram live streamed video. In its own way, the tune is a form of mild social commentary. More vintage audio snippets are accompanied by the band’s trademark surf-meets-synthpop style.

All across Hello Pinky!, Juicebumps navigate the high-wire feat of combining herky-jerky rhythms with pop melodies, off-kilter subject matter and an irreverent, trash-culture worldview. And they do it successfully, balancing those elements in a way that never lets one characteristic overwhelm the incongruent others. For example, the synthesizer solo on “Wetboi” is balanced by stuttering, distorted guitar lines.

It’s not all breakneck-pace punk-pop, though. “Alarm Clock” is a mid-tempo piece that (oddly enough) almost swings. Odder still, its instrumental breaks recall the knotty, polyrhythmic ‘80s lineup of King Crimson. But while the musicians of Juicebumps might harbor the skills to play ambitious progressive rock, they seem more comfortable serving up a subversively oddball music that merely suggests other styles in subtle, plausibly deniable fashion.

The song titles read like outtakes from a Shonen Knife songwriting session: “Ants!,” “Soggy Meow Meow,” “Jumpy.” And on its surface, that music seems simple enough. But a close listen reveal layers of creativity and cleverness. The band’s online bio describes Juicebumps as “San Francisco’s favorite hard to listen to spank-rock band,” but applying the effort to dig into the songs on Hello Pinky! has the potential to reap rewards.