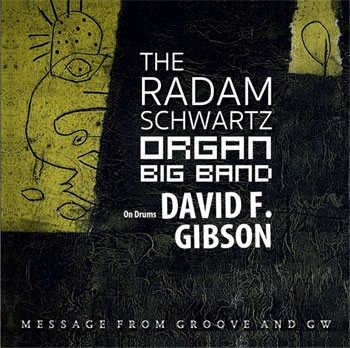 Situating a Hammond organ out in front of a big band is a splendid idea; the verve and energy of the keys plays off well against the muscular, thrilling backdrop of a massive instrumental aggregation. Organist Radam Schwartz plays that organ, and writes most of the tunes on Message from Groove and GW.

Using an assortment of arrangers, Schwartz also makes a point of selecting some superb (and not overplayed) cover material. The Isley Brothers’ “Between the Sheets,” John Coltrane’s “Blues Minor” and “Work Song” (the Mingus one, not the Nat Adderley tune) all get the Schwartz treatment.

Four trumpets, five saxophonist, two trombone players, a guitarist and drummer make up Schwatz’s outfit. The drummer, David F. Gibson, gets a bold-type name check on the album cover, but it’s all-in for every one of these fine players. Things swing, they get bluesy and sometimes (as on the closing “Von Gott”) they even get meditative. All in all, this is a nicely varied set that shows off the skills of bandleader and band alike.