Album Review: The Apartments – In and Out of the Light 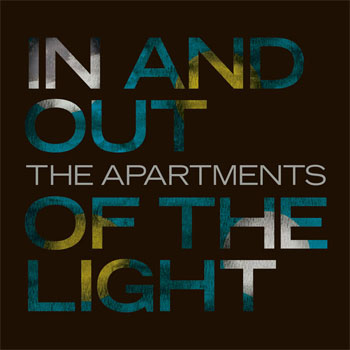 This album from Peter Milton Walsh’s group features deep-hued melancholy, heartfelt lyrics and a vibe that’s equal parts subdued and impassioned. The group’s sound is reminiscent of a more relaxed version of The Church (The Apartments are Australian as well), though Walsh’s lyrics are decidedly more straightforward than those of Steve Kilbey.

Walsh’s well-worn voice might take a bit of getting used to, but it’s worth the minor effort; it’s the perfect instrument to convey the weary, resigned and sometimes wistful lyrical content. Quite possibly the album’s strongest cut, “What’s Beauty to Do?” has some subtly jangle-pop textures, but it’s still consistent in tone with the rest of the albums. “Butterfly Kiss” is darkly elegiac, an antipodean cousin to Big Star’s “Holocaust,” with trumpet.

An interesting technique used throughout the album is Walsh’s overdubbed voice singing two different sets of lyrics, sometimes with different melodies. The crosstalk effect is intentionally disorienting, but its effect is to draw the listener further into the music. The music is already inviting, but it’s Walsh’s lyrics that establish the core of In and Out of the Light. Heartbreak has rarely been this enjoyable.