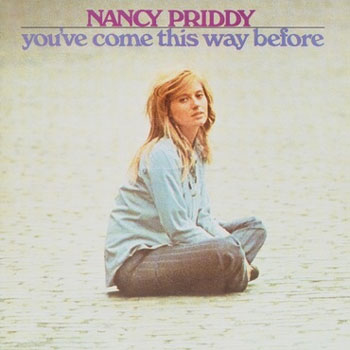 In 1967, a young singer named Nancy Lee Priddy was part of a group of musicians assembled to assist in the making of Songs of Leonard Cohen, the debut release by the Canadian songwriter, poet and novelist. Priddy provided backing vocals on three of the album’s tracks, “Hey, That’s No Way to Say Goodbye,” “So Long, Marianne” and what would become the album’s most well-known tune, “Suzanne.”

Her work on Songs of Leonard Cohen led to Priddy writing songs with jazz/pop musician and producer Manny Albam. With Simon and Albam handling ambitious and sweeping arrangements, Priddy went to work on an album of her songs, with Phil Ramone producing.

In 1968, Dot Records – home to Liberace, Pat Boone and Lawrence Welk – was not known as a hip label. As a result, Priddy’s debut (and for decades her only) album You’ve Come This Way Before virtually sank without a trace upon its release. It quickly went out of print, remaining unavailable for decades to come. But today, used copies change hands for $50 and up. And that’s because Priddy’s record is an overlooked minor gem. You’ve Come This Way Before is the kind of record that could only have been made in ’68, and hearing it today is not unlike discovering a musical time capsule from more than a half century ago.

The record’s folk-leaning songs placed into vaguely psychedelic arrangements makes it difficult to pigeonhole. Production flourishes and massed vocal harmonies give the songs a high polish. And Priddy’s breathy yet commanding vocals are the ideal vehicle for her introspective, dreamy lyrics.

The singer’s goals were clearly ambitious; how else to describe a song named after Andrew Wyeth’s celebrated paining, Christina’s World. She strikes a childlike vocal on the repeated phrase, “This is the way the world begins” on “Ebony Glass,” one of the record’s most intriguing tracks. Celli and violins flit in and out of the ghostly arrangement. “Mystic Lady” is haunting as well, with oboes and crystalline piano adorning Priddy’s lyrics about ladybugs. And the song’s left turn into Mamas and Papas territory is as transcendent as it is unexpected.

“We Could Have It All” has a Bacharach feel, and the peppy “My Friend Frank” sounds a bit like Spanky and Our Gang backed by a coterie of jazz players. Even a relatively intimate tune like “O Little Child” has sterling, subtle production notes. Priddy almost rocks out – and is joined by some otherworldly electronic sounds – on “And Who Will You Be Then.” Analog synthesizers are all over “On the Other Side of the River.” And the record’s closer, “Epitaph” seems to portend more interesting music from Priddy in the future.

But it wasn’t to be; Nancy Priddy soon changed course, putting her attention toward an acting career (The Young and the Restless, Dallas, Quincy, M.E., Barnaby Jones and host of others). She’s the mother of Christina Applegate, and appeared on two episodes of Married … With Children alongside her star daughter. Today she’s retired from music and acting.