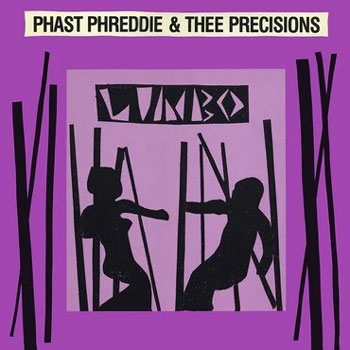 As the seemingly endless parade of retrospective compilations – Nuggets, Pebbles, Green Crystal Ties, Picadilly Sunshine and on and on – has made plain, the mid to late ‘60s were filled with more worthwhile music than any one person could possibly listen to, much less assimilate. But as it turns out, that fact is true of most every era. That truth is born out by intelligent reissues of recordings that didn’t get their due on original release.

One such example is Limbo, a 1984 release that was out of its time then, timeless now. The group – Phast Phreddie & Thee Precisions – made jump blues and swing at a time when the prevailing musical trends tended toward synthpop. Limbo is a studio release, but the chatter that runs through tracks like “Lester Leaps In” gives it a feel halfway between a live recording and The Premiers’ “Farmer John.” The band is clearly having a good time, and that vibe is positively infectious.

As the liner notes and promo one-sheet tell us, Phast Phreddie (born Fred Patterson) and his band were something of a local sensation in Los Angeles. But their fame doesn’t seem to have spread beyond Southern California. The success of similarly retro-minded (if sonically dissimilar) acts like The Stray Cats clearly eluded Phast Phreddie and his cohorts (among them Steve Berlin, later of Los Lobos and the Blasters). But that didn’t keep the group from waxing a pair of what would be best described as EPs.

West Hollywood Freeze-Out was released in 1982; it included five songs. Two years later the band released Limbo, an eight-song set. Both came out on a small indie label, Martian Records. And both featured loose-yet-somehow-tight band arrangement and the howling vocals of Patterson, who often sounds a bit like a slightly more unhinged David Johansen in his Buster Poindexter guise.

One may wonder why the band didn’t release a proper album. Lack of material certainly wasn’t a problem, as the new 2CD set from Manifesto Records makes plain. This new set packs the two EPs onto the first disc, adding several bonus tracks. And there’s an entire second disc as well, twenty more tracks of good-timin’ jump blues. A handful of live tracks demonstrate the wit and energy of the band onstage, and while some studio tunes are repeated in live form, most of the second disc’s material is made up of songs that didn’t appear on the EPs.

A group’s choice of covers often tells a great deal about its collective mindset. That’s the case here as well. Sure, there’s a reading of “In the Midnight Hour,” a bar band standard if there ever was one. But a pair of Frank Zappa tunes – “Peaches En Regalia” and “Hungry Freaks Daddy” make the point that Phast Phreddie and Thee Precisions were crate-diggers of the deepest kind; few artists of any stripe were covering the Mothers in the early ‘80s. Add to that covers of Jimi Hendrix (“Stone Free”) and Dylan (“If You Gotta Go, Go Now”) and the result is one eclectic set of tunes.

While the band was nominally a jump blues outfit, they had a well-honed punk sensibility, one that served them well since they often shared bills with L.A. punk acts. And original tunes like “Out in the Cold Again” (from Limbo) sound and feel like Fun House-era Stooges crossed with Louis Jordan, if you can imagine such a thing. In an era when saxophone was featured in slick tunes like Quarterflash’s “Harden My Heart” and any number of Billy Joel ersatz rockers, hearing Steve Berlin’s squawking sax is a gritty revelation.

If the body of work left behind by Phast Phreddie and Thee Precisions sounds like anything else, it’s something like equal parts Oingo Boingo (another L.A. sensation, one featuring pre-soundtrack work Danny Elfman) and Squirrel Nut Zippers, Jimbo Mathis’ band that came around many years later. (They also sound a bit like King Khan and the Shrines at their best.)

The new 2CD set comes with a booklet featuring a lengthy and detailed essay on the band, complete with quotes from the musicians themselves. Anyone who appreciates any of the like-minded acts name-checked above will find this liberally expanded reissue of Limbo well worth digging into.