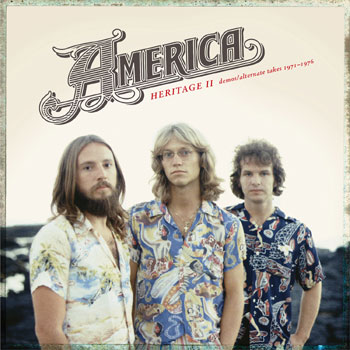 Back when I was growing up, liking the music of the band America was something one pretty much kept to himself. They didn’t exactly rock, and though their vocals sometimes sounded a lot like Neil Young, they never had anywhere near his hip quotient. But there was no denying the appeal of their breezy, well-crafted music. Having one George Martin as their producer surely helped a bit, and catchy songs like “Sister Golden Hair” and “Ventura Highway” easily gave acts like Eagles real competition.

But on the other side, the plodding, goofy lyrics-laden “A Horse With No Name,” and the cloying “Muskrat Love” did little to win the affections of budding rock fans weaned on KISS and Sweet (for example). Soft-rock tunes like “I Need You” and “Tin Man” were among the best of their kind, but when that kind is best described as yacht rock, you’re grading on a curve. And when in the 1980s the apartheid regime in South Africa was enduring a growing boycott movement, America went and performed there. Not cool, guys. Not. Cool. (Okay, to be fair, Sinatra played there around that time as well. But he didn’t court a rock audience, now did he?)

In any event, America – Gerry Beckley, Dewey Bunnell and Dan Peek – had a good run overall, with all of its first seven studio albums charting in the Top 30. They also developed a strong following in Australia and the UK. The ‘80s weren’t as kind to the group, whose acoustic-leaning sound was out of step with the MTV scene. As the decades wore on, new releases slowed to a trickle. Though its title might lead one to think it’s something else entirely, America’s 2015 release Lost & Found featured all new material. But that was the last new music from them to date.

Since that time America has been turning its attention to digging into its archives. Fitting enough, the first release on that score was 2015’s self-released set Archives, Vol. 1. That album whetted fans’ appetite for more of that kind of content, and proved that there was indeed a market for unreleased material from America’s finest hour (so to speak).

Enter Omnivore Recordings. The venerated boutique label has a well-deserved reputation for carefully curated archival releases. The first America release from them was Heritage: Home Recordings/Demos 1970-1973 (yeah, it features a return to the band’s dubious ‘70s practice of titling albums with words that start with the letter H. But we digress.)

Now comes a second volume, widening its focus to include 1971 through ‘76. As with the previous volume, it’s filled with alternate takes and demo versions of songs that longtime listeners will already know. But the emphasis is on polished material; many of the tracks here feature a George Martin production credit. The recordings chosen will appeal primarily to serious fans, though: does anyone else really want (much less need) to hear a “stack-o-tracks” mix of “Tin Man” without the lead vocal line? Nice tune, but these guys aren’t Brian Wilson or Jellyfish.

Still, for fans, this album is a treat. Less ornate readings of their songs reveal the strength of the songs themselves. If you come looking for a rocking good time, you’ll leave disappointed. But if you know what you’re in for, there’s much to enjoy in Heritage II.