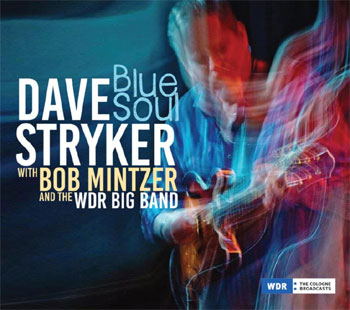 Dave Stryker’s a busy guy. In 2014 he released Eight Track, a sort of conceptually unified collection of covers, non-jazz tunes rendered in the jazz idiom and featuring his electric guitar and some tasty vibraphone. Even though that set was something like his 18th album, Stryker seems to have felt he hit a kind of groove: he’d revisit the concept on three more Eight Track volumes, the latter two reviewed here and here last year.

But Stryker has more on his mind, as evidenced by his latest release, Blue Soul. Fronting the impressive Cologne, Germany outfit the WDR Big Band, he digs into a similar yet different concept. Blue Soul again finds Stryker bending songs outside of jazz into his style, but here the style is thrilling big band jazz.

Jimmy Webb’s classic for Glen Campbell, “Wichita Lineman” gets the Stryker-plus-big-band treatment, as does Prince’s “When Doves Cry.” Both work surprisingly well; the Prince tune gives Styker room to spin out some extended and speedy lead work. Less of a stretch are a pair of Marvin Gaye numbers, the title track from Trouble Man and “What’s Going On.” The latter is soft and soulful, with understated Hammond organ by Billy Test.

Not everything is jazz reinvention here, though. Stanley Turrentine’s “Stan’s Shuffle” closes the set, and it’s one of several cuts to showcase the saxophone work of Bob Mintzer, who gets a co-credit on the album.

Subtlety and fire appear in equal measure on this spirited outing; it won’t surprise me a bit if Stryker decides to continue with future projects in a similar vein.