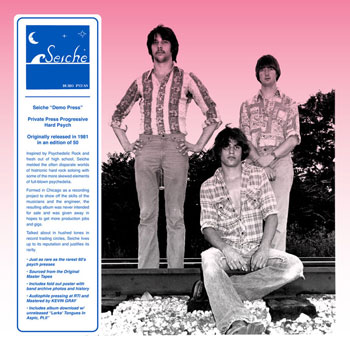 By the dawn of the 1980s, progressive rock was decidedly out of fashion. Neither mainstream radio – which never really embraced the genre, save for free-form FM stations – nor the record-buying public showed much interest in the knotty, ambitious and cerebral sounds that a few years earlier had flourished on the music landscape. The commercially underground had been shined up and repackaged in a more digestible form as new wave, and MTV era lay just beyond the horizon. Trios that drew their inspiration form King Crimson and their ilk weren’t exactly in demand.

But that message seems not to have gotten through to teenagers Joe Klinger, Marc Levinson, Tom Vess and Steve Zahradnak. Klinger was the manager of his three friends; their band was called Seiche. And in April 1981 the band from suburban southwest Chicago – with Klinger engineering and producing – did what bands did in those days: they cut a demo recording.

The way unknown and unsigned bands did things in those days (I’m speaking from a bit of experience here) was to book a studio during low-demand time slots. For example, the middle of the night. Ideally they would have routined their material tightly, so that they could knock out some recordings quickly; the clock was running, after all, and time is money.

But Seiche’s original material wasn’t mainstream. And it’s difficult to imagine that they could have expected much in the way of returns – financial or profile-raising – from the fruits of their labors. Still, they cut eight songs – seven band originals and a well-chosen cover – and pressed the results up on vinyl in exceedingly limited quantity. There would exist only 150 copies of the creative (if not-so-creatively titled) Demo Press. 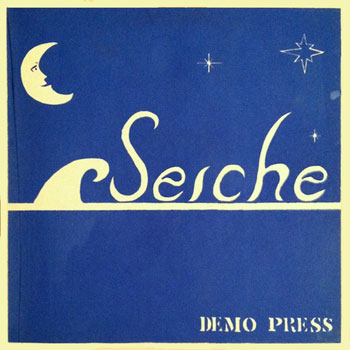 The band had never played live prior to the recording date; Seiche’s debut live performance came some four months later. As they readied for a second gig, the band fell apart. And that, it would have seemed at the time, was that.

But music fiends being what and who they are, Demo Press passed into the ranks of legend. Today, the record is listed on Discogs.com, but not a single copy seems to have been offered for sale. Ebay’s completed listings also shows nothing. It’s that obscure. Happily, Jackpot Records has reissued the record, with new cover art and a bonus track not included on the original release.

So is Demo Press a long-lost undiscovered classic? Perhaps not; the homespun quality of the recording precludes that. Producer/manager Klinger did a good job recording his friends as they played live, but super-high-fidelity this is not. It’s recorded remarkably “dry,” leading one to wonder if the reverb tank and other outboard effects were kept behind lock and key.

But Demo Press is nonetheless very good. The live-int-the-studio performance is remarkably focused and tight considering the newness of the group. There is a kind of hypnotic, jammy quality to cuts like “In the Calm of your Eye,” but if one listens past the surface, Vess’ impressively busy bass work and Levinson’s taut, inventive drumming ably support Zahradnik’s guitar work.

A facsimile of the band’s classified ad seeking a keyboardist describes Seiche as “an originals band with influences ranging from [Pink] Floyd to [King] Crimson and beyond.” Listening to tunes like “Evidently Me,” one might suggest that the band listened to some Black Sabbath as well. With Zahradnik’s Gibson SG at the fore, the band sounds a bit like Tommy Iommi with, say, Stewart Copeland on drums. Deftly-executed instrumental passages straddle early ’70s heavy metal, boogie and prog. 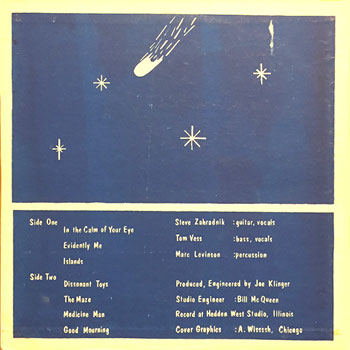 Back cover of the 1981 version of Demo Press

The vocals, however, won’t remind listeners of Ozzy or Sting. Throughout Side One (the first three tracks) the singing is rarely above a murmur; Seiche was all about the instrumental work. And despite the demo-level audio quality (hey, truth in labeling) the fire and passion comes through. Often as not the instrumental passages are one-chord affais, but the trio shows just how much can be done within that tight framework.

“Islands” isn’t a King Crimson cover (we’ll get to that presently). Instead it’s a proggy workout with speedy lead guitar and a bass part that has a melody all its own. The track shifts gears a number of times, and when the band slows things down to a crawl mid-song, they demonstrate just how musically simpatico they are. Seiche packs enough good ideas for a whole album side into the eight-minute piece.

“Dissonant Toys” is sinister, subtle and (of course) a bit dissonant. It sports a catchy riff and a more energetic vocal that displays phrasing reminiscent of Jack Bruce. The trio makes the most of what it has; despite the “live” nature of the recording, the sound doesn’t turn all thin and weedy when Zahradnik switches from rhythm to lead.

He does apply overdubbed guitar on some tracks; A thrilling instrumental, “The Maze” is a case in point. Two very different guitar textures spar while Vess turns out a bass part that suggests he could have as easily been a lead guitarist himself. The band stops and starts on a dime, and Levinson continues to demonstrate his percussive skills in an accessible manner.

“Medicine Man” kicks off with guitar and bass playing in lockstep; they eventually part ways, each taking solo turns within the song’s context, weaving in and out of the core melodic riff. Halfway it becomes a completely different song, with vocals. A bit of harmony/backing vocal work makes a fleeting appearance. A knotty break ends the tune.

The original Demo Press wrapped up with “Good Morning,” a tune vaguely reminiscent of Pink Floyd’s “The Embryo.” Acoustic guitar, minor chords and gentle vocals come together for an appealing number. Zahradnik peels off a tasty, lengthy solo.

Labels from the ultra-rare original pressing

King Crimson’s “Larks’ Tongues in Aspic Part II” isn’t the easiest of songs to cover. And during its brief existence, Seiche focused on promoting its original material. But a dodgy recording of the Crim classic shows that the trio had chops to burn; the recording could almost be passed off as a bootleg featuring Fripp, Bruford, Wetton, Cross and Muir. It’s mightily impressive for a trio of teenagers. Owing to the originals focus, this track wasn’t included on the new vinyl reissue, but it’s available as a download.