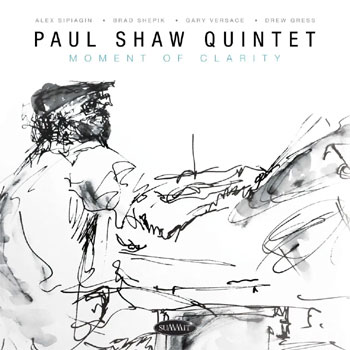 There’s an old joke that has long made the rounds in rock circles: What do you call someone who hangs around with musicians? “A drummer.” Good-natured ribbing aside, few make that joke in the jazz idiom. In the jazz world – more commonly than in rock – drummers are likely as not to be composers as well. Some are quite good. Paul Shaw is one of those. His quintet’s latest release, Moment of Clarity, features seven original instrumental piece, all steeped in the tradition of hard bop.

Another way in which jazz musicians differ from their rock counterparts is that superb name artists are more than willing to share the spotlight. Unlike a rock guitar shredder who takes all the limelight on an album bearing his name, for jazzers, democracy and sharing is baked into the recipe. And the Paul Shaw Quintet is an exemplar of that mindset. The opening cut, “Heartland” showcases accessible ye inspired trumpet soloing from Alex Sipiagin (sometimes with overdubbed second trumpet parts), and a tasty piano break from Gary Versace. Before the track restates its head, everyone takes his opportunity to blow.

“Shapeshifter” starts out with a subtle quote of “My Favorite things” – at least that’s how I hear it – -but then goes other places. The ensemble swings and sways, balancing never-gratuitous displays of skill with melody. In places, the album is subtle and contemplative – “Song for Everyone” and “Mary Oliver” are both fine examples – and in others it’s kinetic and upbeat. Built upon a skittering bass line from Drew Gress, “Peekaboo” rushes along with a feverish yet somehow controlled and understated intensity. And though the focus is on him less often than his associates, Brad Shepik delivers some nicely excited guitar runs. Oddly, when Shaw takes an extended solo on “Peekaboo,” as good as it is, it’s not a true highlight.

Shepik’s finest moments come toward the end up the album, on its title track. And while the other players give him plenty of space, they do more than vamp while he solos. The sense of unspoken communication is strong throughout Moment of Clarity. And the quintet pulls out all the stops for a lively and timeless set closer, “Showdown.” Easily the best track on a consistent album, it shines a light not only on each of the fine players involved, but on the manner in which they work together as a cohesive whole.