Russ Wilson: It’s All About the Music 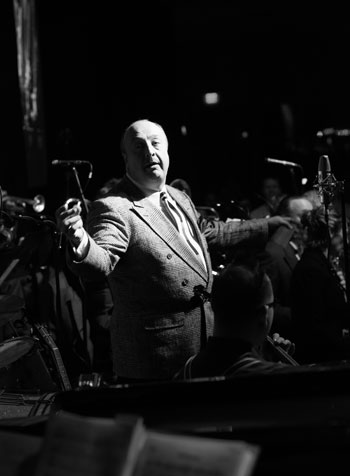 Russ Wilson is one of the busiest musicians in Western North Carolina. Leading or playing in no less than nine bands, the singer and multi-instrumentalist has still found time to compile an album of songs that showcase the breadth of his musical vision. And for the sixth year in a row, he was set to host an evening of holiday classics: “Have Yourself a Swingin’ Little Christmas” happened December 22 at Isis Music Hall in Asheville.

Born in the mid 1960s, Wilson’s musical journey took him in a direction very different from that of most of his contemporaries. “When everyone else was listening to DEVO and Blondie, I was listening to Louis Armstrong, Jack Teagarden, Red Nichols, Count Basie, Benny Goodman and Gene Krupa,” Wilson says. “And It’s all because of my dad.”

Wilson’s dad didn’t have any special musical talent. “He always joked that he could barely play the radio,” the bandleader says. But he was a voracious reader, and also took a great interest in the vinyl boxed sets put together by Reader’s Digest. Two of those collections would make an indelible impression on young Wilson. “One was called The Great Band Era, 1936 to 1945,” he recalls. “And another one, which I still listen to, is called In the Groove with the Kings of Swing.” The latter inspired the name of Wilson’s popular radio show on WPVM-FM.

“Through my dad, I also got into Bob Wills and the Texas Playboys, and just whatever was laying around the house,” Wilson explains. “And when I was old enough to be let out of the house by myself, I’d hang out at the public library on Saturday afternoons, checking out records. And it just stuck.”

Today Wilson appears live four or five nights a week, singing and/or playing with groups led by him or other longtime associates. Those groups take in a wide array of styles, from big band swing to jump blues to prewar hot jazz to early rock ‘n’ roll.

And that wide-encompassing approach to American musical forms is condensed – like the stories in his father’s favorite Reader’s Digest – on Wilson’s latest album, It’s All About Me. Across fourteen tracks – some recorded decades ago – the album is a tidy survey of Wilson’s musical world. Featured variously a a singer, musician and conductor, Wilson works his way through uptempo proto-rock (“7 Nights to Rock”), doo-wop (“I Only Have Eyes for You”), vocal jazz (“Bei Mir Bist Du Schön”) and even Southern gospel (“Headin’ Home”).

That last track is one that Wilson recorded himself in the 1990s using a pair of cassette decks. Playing guitar and overdubbing his voice multiple times – and crediting the track to Russ Wilson’s Harmonizing 4 – the recording makes the point that he can do it all.

But instead, on most of the album’s tracks (and for live performances) Wilson draws upon the deep well of musical talent in and around Asheville. The album features recordings by The Jon Henrys, Firecracker Jazz Band, The Russ Wilson Swingtette and more. In his liner notes for It’s All About Me, Wilson makes it clear that the album title is meant half in jest: “…without these people in my musical life, there is no ‘ME,’” he writes.

And some of those people would be joining Wilson as he took the stage for this year’s Christmas concert. Frequent collaborators Wendy Jones (vocals), guitarist Hank Bones and pianist Richard Shulman are part of an 18-piece big band – “four trumpets, four trombones, five saxes, piano, bass, guitar, drums and me,” Wilson says – for an evening of song and sentimentality.

“We’ve got a few new arrangements that we’re bringing in, but we’re going to play all the old favorites,” Wilson said ahead of the show. “Wendy has a big band arrangement of ‘White Christmas.’ And last year we started doing ‘Silent Night.’” For that number, Wilson stands at the edge of the stage as the house lights are brought up just a bit. And the audience joins in. “You’d be amazed how many good singers are out in the audience; you start hearing spontaneous harmony parts,” Wilson says, smiling at the thought.

“It’s like every one of those Bing Crosby and Perry Como Christmas shows you saw,” Wilson says. His dad would have been proud.