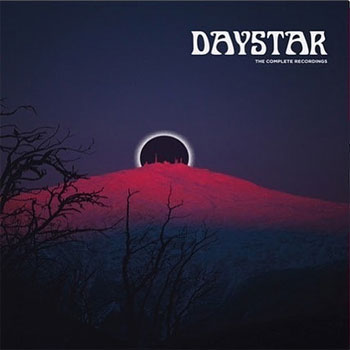 It’s always tricky choosing a band name. I once had a group called the Buzztones; we played obscure ’60s garage-psych. But one day we discovered there was another Buzztones, and they were a Christian rock [sic] group. Ugh. So we changed our name to The Echoes of Tyme (side note: that name’s available now if you want it).

Speaking of which, Google “Daystar band” and the first thing you find is another Christian group featuring someone with the surname Lamb. (No, really.) But dig a bit deeper, because it’s worth the effort. There’s a Daystar from Portland Oregon, and they’re good. Led by songwriter Derek Phillips, the four-piece group makes a kind of folk-flavored rock that isn’t folk-rock.

They’re not aping styles (as far too many powerpop acts, for example, tend to do) but Daystar does have a breezy sound that occasionally recalls Badfinger. I’m not thinking here of “Come and Get It,” but more of the deeper album cuts that showed the Welsh-British band’s nuance and sophistication. A track like “A Lot to Love” on Daystar’s The Complete Recordings would have fit nicely on Badfinger’s self-titled Warner Brothers LP. And “People Get Lonely” evokes warm thoughts of No Dice tracks.

But I don’t want to make too much of any purported Badfinger similarities. Daystar really don’t aim to sound like anyone but themselves. It’s just that the timeless production values, and little things like mixing the close-harmony vocals and lead guitar parts right out front, tend to remind one of the way they used to do it.

The Leslie-effected guitar on “All That You Know,” “Sunny Golden Side” and elsewhere conjures thoughts of Let it Be-era Beatles, but again I’ll emphasize that there’s nothing explicitly retro about Daystar. Solid songs, uncluttered and appealing arrangements and an overall unpretentious vibe are the defining characteristics of The Complete Recordings.

The first side of the LP presents a suite of songs that fit together stylistically. It’s on the second side that Daystar opens up its approach to show what else the band can do. The band rarely rocks hard, but when it does – as on “Buttons and Brass” – it does so credibly. But the laid-back, Neil Young-styled “Angelina” is more in line with what seems to the Daystar’s overall musical sensibility. The country-rock of “Ballad of Sister Sadie May” works, too. And “Get Yourself Away,” a primarily instrumental number, ends with squalls of electric guitar and white noise. That leads into a Big Star Third-styled album closer, the gentle “Fade Away, Love.”

Other than the welcome Mellotron flourishes that adorn “Warped Reality,” there isn’t really anything about this music that sticks a pin in any particular time. It’s certainly not “modern rock.” Instead it’s midtempo, heartfelt music that was obviously made at a time in which the artists involved were committed to getting it right.

A few words about the physical product are in order here. I have The Complete Recordings on vinyl. Apaprently there’s a purple edition, but mine’s plain old black. No problem at all. The sleeve is sturdy, and inside there’s a lyric booklet, about the size of a 45 r.p.m. picture sleeve, with a card stock cover. That’s a nice touch that also hearkens back to the ’70s. And the ubiquitous download card is CD-sized, printed in color on one side, and set up to be a post card. That, too, is a nice touch.