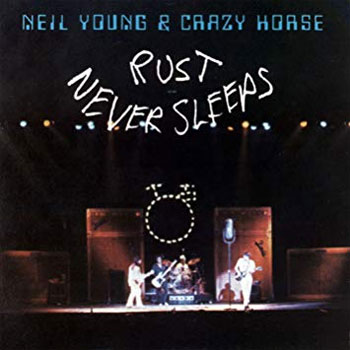 As the 1970s wound toward a close, Neil Young placed himself in a curious position. By that point he had been in the public eye as a musician for more than a decade; he first came to wide attention as a member of Buffalo Springfield, then as an on-again-off-again collaborator with David Crosby, Stephen Stills and Graham Nash (giving rise to the phrase “CSN & sometimes Y”).

But he had launched a solo career in early 1969 as well. Recording under his own name, and sometimes billed with the band Crazy Horse, Young had released nine albums by 1978. So successful was his eclectic body of work that his label, Reprise, compiled a three-LP survey of his work. That kind of treatment of an artist was largely unprecedented, but Decade nonetheless went Platinum in the U.S., underscoring the popularity of the idiosyncratic artist.

Young’s 1978 album, Comes a Time, mostly reflected the folkier, singer-songwriter side of Young’s music; it was a major commercial and critical success, and featured “Lotta Love,” a song that – in a new recording featuring a more pop-leaning arrangement – would be a hit single for Nicolette Larson (Larson sang harmonies on Young’s version as well).

Against the backdrop of a string of successful albums, singles and the career-spanning Decade collection, a live album seemed to make good sense. But Young being Young, he would approach the concept from an unusual angle. Working on record for the fourth time with Crazy Horse, Young put together live recordings of nine new songs. A varied lot that would feature some of his best-ever work, Rust Never Sleeps displays the care and focus that – at least when he wanted to – Young could apply to his projects.

The original LP was divided into acoustic and electric sides. The album – which was in fact recorded live, but with most of the audience sounds edited out – opens with “My My, Hey Hey (Out of the Blue).” The song was co-written with Jeff Blackburn, Young’s band mate in the frustratingly short-lived supergroup, The Ducks. Featuring some of Young’s most enduring lyrical phrases (“It’s better to burn out than to fade away,” to cite but one), the song itself is a plaintive mediation featuring Young’s voice, acoustic guitar and harmonica. The lyrics briefly seem to allude to the death of Elvis Presley, who had died in 1977 (“the king is gone but he’s not forgotten”), but that line is immediately followed by a reference to punk (“this is the story of Johnny Rotten”). Ultimately, Young leaves his point something of a mystery, other than to suggest that “rock and roll will never die.” Perhaps hinting at what he saw as the public’s failure to appreciate the depths within his own work, he adds, “there’s more to a picture than meets the eye.”

“Thrasher” features one of Young’s loveliest melodies, a storytelling song that would have fit nicely on Comes a Time. Young’s heartfelt, first-person delivery of the pastoral lyric is full of vivid imagery that variously evokes rural America, the expansive Southwest and the melancholy feel that can come when setting out alone on the open road. His lyrical turns of phrase (e.g. “the motel of lost companions”) at times rival those of Bob Dylan.

The brief “Ride My Llama” sounds like the kind of song Young had included on his earlier records; rather than the insistent, folky strumming of “Thrasher,” it features a more involved and nuanced musical arrangement reminiscent of Joni Mitchell. And although the song is more or less a Young solo number, studio overdubs provide wordless vocal harmonies.

The ballad “Pocahontas” is among Neil Young’s most-covered songs. The titular subject of the fantasy lyric travels through time, meeting Marlon Brando at the Houston Astrodome sports arena. Contrasting Young’s gentle vocal delivery, the story chronicles the horror of a massacre. Young narrates the story in first-person; it’s not designed to make a great deal of sense.

Building on the country flavor of “Pocahontas” (and connecting with its lyrics by opening with the line “I could live inside a teepee”), “Sail Away” wouldn’t have been out of place on AM country radio of the era. Another shimmering, fetching melody, its represents Young at the peak of his compositional ability.

Once “Sail Away” ended, record buyers who purchased Rust Never Sleeps had to cross the room to their turntable and flip the vinyl record over to its second side. As the needle dropped into its groove, those listeners would be greeted by a very different kind of music.

Initially, Young still seems to be playing his acoustic guitar, but once “Powderfinger” gets going, he’s joined by the electric trio of Crazy Horse: guitarist Frank “Poncho” Sampedro, bassist Billy Talbot and drummer Ralph Molina. A midtempo rocker, “Powderfinger” features more of Young’s surreal storytelling. Again using first-person perspective, Young sings about a warship coming up the river, and includes the gallows-humor line, “it don’t look like they’re here to deliver the mail.” The lyrics are joined by a simple yet highly effective twin-lead guitar figure. And Young turns in one of his trademark wobbly-yet-melodic lead guitar solos. Vocal “ooh” harmonies apply a breezy, Southern California style vibe reminiscent of Eagles; on the final chorus, those harmonies are – to borrow a phrase Young would use many years later – ragged but right.

“Welfare Mothers” is an odd one. With somewhat off-color humor and electronic handclaps wedded to a stomping, elementary melody, it also features stacked vocal harmony overdubs that owe at least some debt to Meat Loaf’s Bat Out of Hell, released in 1977. It’s fun but silly, largely an excuse to use the line “welfare mothers / make better lovers.” The tune careens on the edge of being out of tune, an approach Young would use again more than once in his long career.

“Sedan Delivery” cranks up the distortion, and the song alternates between a stomping section and a soaring, half-time break. Near the songs’ end, the vocals are shouted and deliberately offhand. The guitar signal is pushed through so much distortion that it breaks apart; sonically, it has traveled a long distance from the pristine, clear acoustic textures that opened the record.

All of which sets things up perfectly for the album closer. A companion piece to the opening tune, the angry, insistent “Hey Hey, My My (Into the Black)” serves as a contrasting bookend. Played in a different key with massive sheets of crunchy distortion, the tune also features retooled lyrics. It’s credited as a Young solo composition, suggesting that Jeff Blackburn’s contribution to “My My” was limited to select lyrical bits. The nearly atonal quality of the distorted guitar parts foreshadows Young’s 1991 all-distortion-no-music live album, Arc. But through all the wonderfully careening noise, “Hey Hey, My My (Into the Black)” still asserts its place as a rock ‘n’ roll anthem. And it’s the perfect closer for Rust Never Sleeps. As the needle follows its path into the vinyl LP’s runout groove, the cheering live audience is finally heard. 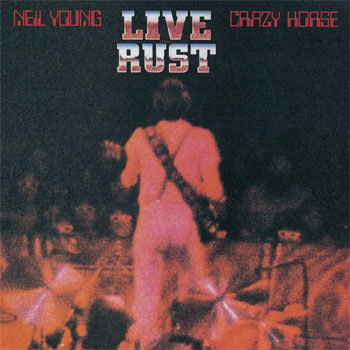 Rust Never Sleeps was released on June 22, 1979. In the U.S., it rose to the #8 position on Billboard‘s album chart, and earned near-unanimous rave reviews, with many critics counting it among Young’s best (a status it maintains to this day). But more than a bit bizarrely, Young would follow up the album less than five months later. And that follow-up was again a live album, this time with the audience sounds intact. Live Rust also featured four of the songs heard on Rust Never Sleeps in not-too-different versions. Live Rust followed the similar acoustic-to-electric progression of songs. The double live album is superb but confounding: it’s essential and redundant in equal parts.

Beyond the bookending “My My, Hey Hey (Out of the Blue)” and “Hey Hey, My My (Into the Black)” and versions of the best tracks from Rust Never Sleeps, the double-live album has a number of highlights that make it special. As great as their earlier studio counterparts are, Live Rust‘s live readings of “Lotta Love and “The Loner” (the latter originally on Young’s self-titled 1968 debut) are definitive.

And the same can be said for impassioned and majestic versions of “Cortez the Killer” and “Like a Hurricane.” Both are long songs – just under eight minutes – but their studio versions were long as well. Still, the energy that comes from live performance makes each of the songs more visceral, more effective in conveying the emotional content of both the words and the music.

Some of the between-song banter on Live Rust would have made little sense to listeners who hadn’t seen Young on tour. In the context of a film, perhaps Young’s asides to “road eyes” might have been comprehensible.

So if 1979 wasn’t already a confusing enough year for fans of Neil Young, a concert film was released around the same time. Titled the same as the “studio” LP (Rust Never Sleeps), it follows the set list of Live Rust, albeit with more songs (mostly from – you guessed it – Rust Never Sleeps). By that measure, it compounds the redundancy of of Young’s 1979 activities, but wait: while Live Rust is compiled from recordings of multiple tour dates, the Rust Never Sleeps film documents a single performance at San Francisco’s Cow Palace. 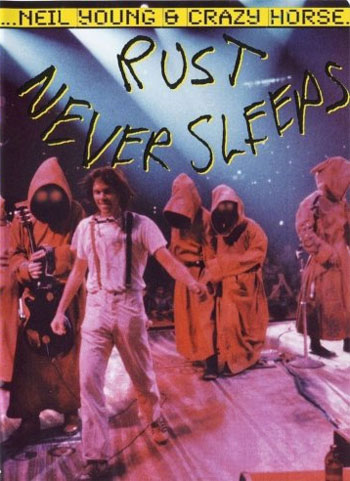 If followers of Young’s work weren’t already flummoxed, his work in the decade to come would correct that oversight. He dabbled – some would say perversely so – in a myriad of styles from rockabilly (Neil and the Shocking Pinks’ Everybody’s Rockin’), Vocoder-laden electronics (Trans), straight-ahead country (Old Ways), sterile, synthesizer-based music (Landing on Water) and rock with a big horn section (This Note’s for You). If he seemed intent on pissing people off, he succeeded: label head David Geffen sued Young, accusing him of deliberately turning in uncommercial projects.

Geffen lost. Young returned to Reprise by 1988. Twenty-plus albums later, he’s still at it, and still with Reprise. And he continues to confound, intrigue and entertain in equal measure.