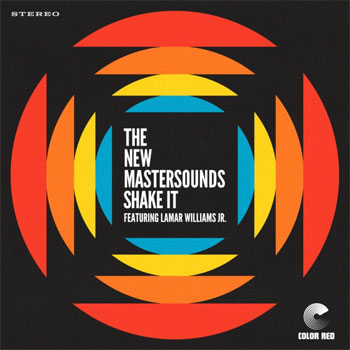 It may well not have been their explicit intention, but over the last two decades, the New Mastersounds have helped a strain of jazz to become mainstreamed into widespread popular culture. Jazz has always been there – at least for a hundred or so years – but with some important exceptions it’s enjoyed only a specialist/niche appeal. But in the same way that artists like Sharon Jones helped bring about renewed interest in soul, the Leeds-based (now Rockies-based) quartet has done significant work to bring its brand of boogaloo (or funk-jazz, if you prefer) to the masses.

For the most part, the New Mastersounds are an instrumental outfit: guitar, bass, drums and keyboards – a classic lineup. But more than a few times throughout their career, they’ve teamed up with powerhouse vocalists, both onstage and on record. Corinne Rae Bailey was one of the first singers to benefit from the muscular, funky and freewheeling musical engine that is the New Mastersounds.

These days, the band – guitarist Eddie Roberts, keyboardist Joe Tatton, drummer Simon Allen and bassist Pete Shand – is well-established as darlings of the jam band set. That’s especially remarkable, because the band doesn’t noodle aimlessly; their arrangements follow the jazz aesthetic of carefully arranged pieces that have spontaneity baked into the recipe. They manage to thrill instrumentally without ever being showy. There’s an exuberance about the New Mastersounds’ music that comes across without the need for words or visual pyrotechnics.

Yet when they do decide to add a singer – as opposed to back up a singer: an important distinction, that – the New Mastersounds really cook. And while their work with Bailey, Dionne Charles, Adryon de León and others (not to mention the times when the members themselves step up to the mic) has been uniformly superb, there’s something extra special about Shake It, the band’s latest release. Featuring Lamar William Jr, Shake It represents perhaps the most seamless integration yet of a vocalist into the New Mastersounds’ musical world.

To be sure, the New Mastersounds have always taken a pleasingly open-ended approach to their art, adding horns and other ingredients to their soulful sonic stew. But much of their work with singers has has a slight whiff of “instrumental band with guest singer” about it. Not that there’s a thing in the world wrong with that vibe, but on Shake It the end result is a tightly cohesive unit. Perhaps significantly, all of the songs on the new album are composed by the band plus Williams and trumpeter Mike Olmos. Shake It truly is a collaborative effort.

From the sultry “Let’s Go Back” to the Muscle Shoals feel of “Love They Deserve,” the New Mastersounds deliver knowing distillations of jazz, funk and soul in the form of new and original songs. Lovers of sixties Southern soul may find Shake It the band’s most pleasing outing to date, but there’s plenty here to delight anyone who digs the band’s general approach. Roberts and his band mates deftly navigate the high wire act of combining tasteful playing (think Booker T & the MGs) with deeply expressive ensemble-based instrumental work (a la the Meters), creating something that’s at once new and based in tradition.

Longtime listeners who may prefer the instrumental configuration can luxuriate in “Layin’ Low,” a Tatton showcase, and “Permission to Land, “a horn-laden workout. But there’s something on Shake It for all sorts. Whether your tastes lean toward reggae, funk, soul, jazz, ska (“On the Up (S.K.A.)”) or most any other musical idiom, it’s difficult to not be impressed by the New Mastersounds. And while there’s nary a duff title in their entire catalog (now well in excess of a dozen releases), Shake It may well be the best entry point for those who have yet to discover their virtues.