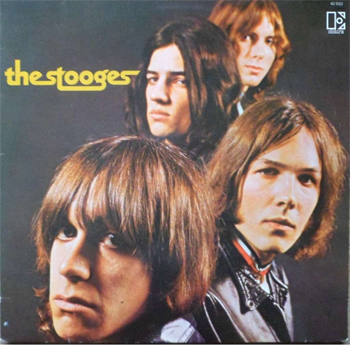 There was little precedent – virtually none on major labels – in 1969 for The Stooges. As a genre, punk rock hadn’t even been conceived, nor had “shock rock.” So it was largely unexpected when Elektra signed a scuzzy, primitive band from Detroit called the Stooges.

The album package itself was deceptive. Most every visual element – the style of photography, the positioning of the band members in the shot, inclusion of a band logo as a design element, the layout – was shamelessly copied from the debut release of Elektra labelmates the Doors. But where the L.A. band had artistic ambitions (and a singer whom many saw as pretentious), this group of Michigan players clearly approached things on a more elemental level.

People weren’t sure what to make of them. When influential rock critic Lillian Roxon penned her Rock Encyclopedia in 1969, she referred to the group by what was (apparently) its original name: the Psychedelic Stooges. Even though the group didn’t have an album or even a single to its name at that point, she considered them important enough to include in her book. Right there in the “P” section, just above Gary Puckett and the Union Gap, Roxon wrote:

A Detroit rock group that combines politics, comedy and music, the Psychedelic Stooges have been described as having the spirit of W.C. Fields, the Three Stooges, the Marx Brothers, and Elvis Presley. They were discovered in 1968.

With due respect to Roxon, it’s fair to wonder if she had any first-hand knowledge of the Stooges. While one might derive some chuckles from hearing just how defiantly simplistic the band’s music is – shorn as it is of all nuance – comedy it ain’t.

The eight songs on The Stooges were produced by John Cale; his band, the Velvet Underground, had already developed a well-earned reputation as chroniclers of the seamy underbelly of society. And while the VU had artistic aspirations of their own – Cale’s main instrument is the viola, after all – their resolutely stripped-down aesthetic was not miles away from the Stooges’ sound.

Save for Cale’s viola on one track, all of the sounds on the album come from the singer (born James Osterberg, billed here as Iggy Stooge, and later to be known as Iggy Pop) and an instrumental trio: guitarist Ron Asheton, bassist Dave Alexander and Ron’s brother Scott on drums. The Stooges is not about deeply layered arrangements; most everything has a one-take, live-in-the-studio feel.

The album opens with “1969.” A loping rhythm led by Asheton’s wah-wah guitar suggests that we’ll be hearing one kind of music, but it’s a red herring. A few seconds into the song, the band switches direction, cranking out a simple, hypnotic melody that recalls Bo Diddley twice removed. It’s almost as if the band heard Bo (and some blues) once or twice, took one or two music lessons, picked up their instruments and tried to approximate those textures. Ron Asheton lets loose with distorted guitar work, and the rhythm section sounds as if it’s keeping things simple so as to be able to hold together. Iggy sneers in a fashion familiar to fans of the Rolling Stones (and Chocolate Watch Band), and those sneers seem to come more naturally to him than they ever did to the London School of Economics-educated Mick Jagger.

From its buzzsaw guitar opening flourish on down, “I Wanna Be Your Dog” is far more abrasive. With a texture that sounds like a slowed-down version of The Open Mind’s “Magic Potion,” the band pummels on insistently. Scott Asheton’s drum track is accented with nonstop shaker that incongruously sounds like sleigh bells. The song itself is so primitive it would make the Ramones blush: the whole thing is three – hell, two and a half, really – chords played over and over. Lyrically out-there, it’s more than a little outside pop music subject matter of the day. Just when Ron Asheton kicks into a solo, Cale pulls the faders down and the song ends.

At ten minutes plus, “We Will Fall” is the lengthiest track on The Stooges. In fact it’s longer than any two of the remaining tunes combined. And its arrangement – centered around a droning viola from Cale – has more to do with the Velvet Underground’s “The Gift” than anything else on this LP. Mock-Gregorian chanting vocals provide a sort of countermelody to Iggy’s very Lou Reed-styled vocals. The one chord – one note, really – musical backing becomes monotonous; there’s certainly a feel of doom and dread, but the music never threatens to go anywhere, and it doesn’t. In a word, it’s no fun.

Speaking of which, after “We Will Fall” ends, the adventurous record buyer of 1969-70 would have ventured over to the turntable to flip the record over. The second side opens with what’s easily the best track on The Stooges: “No Fun.” The band stretches out to three chords, and here they make a virtue of monotony. Ron Asheton’s amp sounds as if it has a blown speaker. Asheton is the star here: atop his unrelenting rhythm guitar, he overdubs a solo that’s ambitious and shockingly primitive at once; here more than perhaps anywhere else, his comparatively limited instrumental ability is a virtue. Six years later when a British group called the Sex Pistols started covering the song, it approached “No Fun” just like the original.

“Real Cool Time” is the briefest cut on The Stooges. Cale’s production choices here seem a little off: the band is buried in the mix; Iggy’s sung/spoken vocal takes (another) page from the Mick Jagger playbook, and Ron Asheton nearly wears out his wah-wah pedal. It sounds like Dave Alexander might be doing some of his most interesting bass work here, but it’s hard to hear it.

“Ann” sounds like the Stooges doing a Doors parody. Iggy’s vocals sound as if they were cut in a cavernous room adjacent to the actual studio. Scott Asheton plods along, and the rest of the band isn’t given much to do. Almost as if to make up for the languid “Ann,” “Not Right” is seething, blistering proto-punk. Fans of the MC5 would have likely been impressed with the tune’s vicious feel, if not the virtuosity of its players.

The record closes with “Little Doll,” a tune on which Iggy essentially continues singing “1969” with different words. The song is full of menace as it churns along in a midtempo way; the arrangement is full of druggy haze. Dave Alexander plays the most elemental of bass lines. The entire mix is muddy; that’s somewhat surprising in light of the fact that’s it’s a Jac Holzman remix (Cale’s original mix was found wanting). Still, even through the sonic murk, Scott Asheton seems to be turning in his finest performance of the entire album. At this point, guitarist Ron Asheton may only have one trick in his bag, but it’s a good trick: he spins out a solo that – in retrospect – can be thought of as a punk/psychedelic answer to the kind of boiled-down solos Neil Young would soon make famous.

For all its audio-verité nature and seemingly dashed-off quality, The Stooges would become a highly influential release. That’s not to say it sold well on original release (it didn’t) nor that it was received positively by critics (with some notable exceptions, it wasn’t). The brutal and uncompromising sound of the band’s debut album was so out of step with prevailing styles of the era that it might have even seemed a joke to some listeners.

The album reached a dismal #106 on the U.S. album charts, and its follow-up – the very different but equally uncompromising Fun House – failed to chart in the U.S. at all. But time soon proved that The Stooges was an important album, and it would influence the coming punk movement to a great degree.