Book Review: A Voice of the Warm 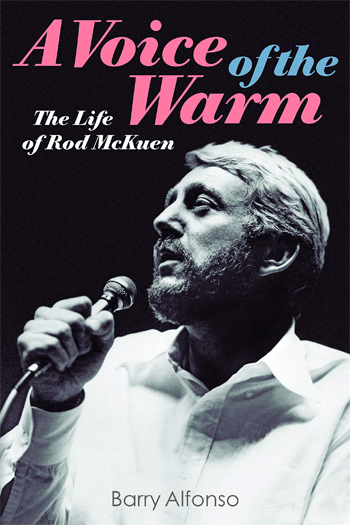 Every so often, some of my Facebook friends and I engage in a little game. You might call it Dreadful Earworms: we try to outdo each other by rattling off the titles of some of the most annoying, saccharine, maudlin and just downright awful songs. If you’re a boomer (or perhaps even the child of one) you can likely do well at the game. Just mention The Oak Ridge Boys’ “Elvira,” for starters. “Or maybe Clint Holmes’ treacly “Playground in My Mind.” Eventually, you or someone else will come around to Terry Jacks’ cringe-inducing “Seasons in the Sun.” For me, that one tops ’em all; thoughts of it literally make my flesh crawl. And not 21st-century not-literally-literally. Literally.

Of course Jacks didn’t write that tune; we have him to blame only for the unforgivable transgression of popularizing the damn song. The original was by the otherwise laudable Belgian composer Jacques Brel, who titled it “Le Moribond,” which translates as “The Dying Person.” It was to singer-poet Rod McKuen that the task of penning English language lyrics would fall. I’ve never read a translation of Brel’s original words, but I somehow suspect McKuen made the song even more maudlin than it was to begin with.

Or perhaps not. Still, it’s for writing that song – and a few other things – that McKuen is best known. In the world of music, he’s a relatively minor figure, one who didn’t enjoy massive commercial success. But he was a fascinating figure, one whose body of work is massive: nearly 30 books of poetry and more than a dozen other books; about 60 albums of music with vocals, 10 spoken-word releases, some 14 classical albums(!), a dozen soundtrack LPs and as many live releases. Clearly the man was driven, and that’s putting it mildly.

He also had more than his share of demons. And the entire arc of McKuen’s often deeply troubled life is the subject of Barry Alfonso’s A Voice of the Warm: The Life of Rod McKuen. Alfonso approaches his subject in the full knowledge that a sizable portion of those who know of McKuen’s work simply don’t like it: he’s too sentimental etc. etc. But he soldiers on in the greater and more substantial knowledge that McKuen’s story is tragic and fascinating. Not to be crass, but at times, reading Alfonso’s vivid and splendidly-written narrative, I felt like a motorist who has happened upon a traffic jam caused by a gruesome car wreck. As I trundle slowly by, I can’t turn away.

In that sense, A Voice of the Warm is a real page-turner. McKuen’s sexual exploits aren’t for the faint of heart, and they’re not of the wild-n-crazy rock-n-roll variety, either. A Voice of the Warm is filled with abuse, violence, abandonment as other unhappy ingredients that came together to form McKuen. But what could have been treated as a lurid “music industry Babylon” type story is treated instead with care and respect – and with a reporter’s clear eye – by Alfonso.

The author has done a highly admirable job of piecing together the stories to craft a complete picture of McKuen. And, as he explains through the book’s pages, he was careful not to place too much (if any) stock in McKuen’s own accounts; the singer-poet had a strong predilection for historical revisionism, mythmaking, self-mythologizing and just plain making-shit-up, it seems. Alfonso suffers from none of those failings, nor is he taken in by the products of them in his subject.

A Voice of the Warm isn’t likely to change the reader’s opinion about “Seasons in the Sun.” It certainly didn’t change mine. But for those who choose to dive into the story, it’s a revealing portrait of a figure whose influence, ultimately, is felt in ways well outside music and/or poetry. I’ll leave it to you, the reader, to explore Alfonso’s book and find out what I mean. It will be a worthwhile endeavor.