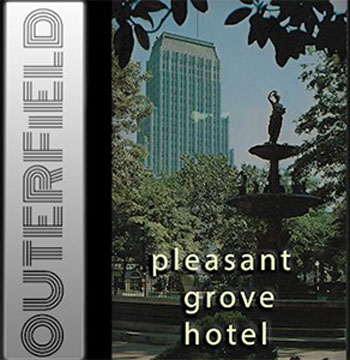 The opening lick on “Wondering If You’re Real” suggests that Pleasant Grove Hotel is going to be a swampy, Southern-fried blues rock outing. As it turns out, that description isn’t accurate of the album as a whole. With a basic, two chord foundation (see also: “Feelin’ Alright” and eleventy billion other tunes), it’s a catchy enough tune. But as the album unfolds, Outerfield shows itself to have more ideas. The production is spare and uncluttered, and the meat ‘n’ potatoes rockers are appealing in their own way. Violins (or more likely, keyboard samples therof) are effectively employed on “Voices,” a track that shows this Indiana band to have some welcome nuance. Some of the dissonant chord shadings move beyond mainstream pop into something a bit more ambitions, but still accessible. “Stay the Same” has a sort of Black Crowes vibe, with lots of busy guitar lines. “Getting it Right” is classic pop. The album gets more varied as it goes along, but the songs all fit together to provide a portrait of an interesting act. At times the vocals seem a bit enervated, but then there’s a stomping rocker like “Vending Machine” that pumps up the volume. “You Weren’t Done Yet” comes as a late-in-the-album surprise, nailing the woozy, dissolute, raggedy vibe of Big Star’s Third.