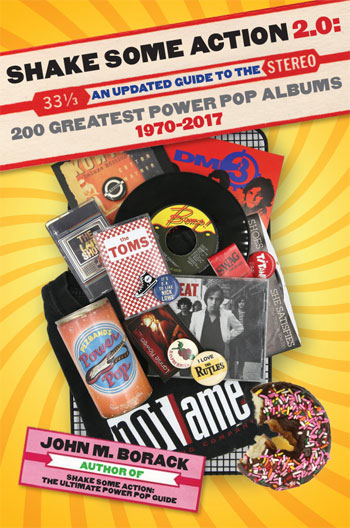 In 2007, John M. Borack (later the author of Life is What Happens) put together a compendium of album reviews in book form. Shake Some Action explored the narrow slice of the pop-rock world that is powerpop, that oft-maligned subgenre where Raspberries, the Knack, Greenberry Woods and others live. As so many critics seem unable to resist doing, Borack wasn’t content merely to list the albums; no, he was compelled to rank them. Doing so is sure to invite spirited debate among the powerpop anoraks of the world (forgive that redundancy). In all likelihood, that was part of the author’s intention.

Published by Not Lame – a guiding light in the 1990s powerpop renaissance – Shake Some Action sold well (something much of the music it covered often/sadly/unjustly did not), and several pressings of limited-edition runs all went out of print. Visit Amazon looking for a used copy and expect to find two characters offering up their copies for $200 and $250 respectively. (As of this writing, you can do slightly better on eBay, where some bloke offers the “Buy it Now” price of only $150.)

Against that backdrop, it makes good sense to bring the book back into availability. But with a decade-plus having passed since its original release, there have been a good number (well, a fair number) of noteworthy releases that fit into the powerpop paradigm. Moreover, time has a way of providing perspective; sometimes that record so beloved on release ends up sounding hopelessly dated after a few hundred listens. So – again – it makes good sense to consider a reissue of a book such as Shake Some Action as the opportunity to look at/listen to things with fresh eyes and ears.

That is what Borack does in the first 250 or so pages of Shake Some Action 2.0. But in his foreword, he adopts a somewhat defensive posture. To wit: “…there were also many not-quite-so-kind folks who saw fit to question my musical taste, my sanity, and my very reason for walking this earth.” Now, perhaps if one saw and heard him saying these words in person, they might detect a wink and a smile, letting them know that he’s at least kidding on the square. In print, the reader is left to wonder if he’s actually butthurt about the inevitable criticism any book receives.

Still, as the book works its way through 200 powerpop albums released between 1970 and 2017, Borack does a fine and creditable job of letting readers know what – to his mind – makes each noteworthy. Especially when dealing with the matter of the powerpop category of music, it’s no easy feat to craft a seemingly endless barrage of superlatives without repeating the same few adjectives over and over. It’s a testament to his clear, concise writing style that he succeeds on this score.

The inclusion of quotes from the artists themselves (appended to the end of each review) is, on the face of it, a good idea. Unfortunately, some of those artists don’t have much of interest to say. The result feels like padding.

Speaking of which. Not content to revise and re-order the contents of the old book, this new edition adds an additional 150 pages of reviews. None of these additional eleventy-billion powerpop reviews (I exaggerate slightly for effect) make the cut of Borack’s top 200, even though the bottom rungs of said 200 feature obscurities unknown to all but the most trainspotting powerpop devotee. Not that there’s anything wrong with having a boatload more reviews, but their inclusion seems as much a function of fleshing the book out to its nearly inch-thick size than providing a useful consumer guide.

It’s perhaps worth pointing out that for the most part, even an album that comes in for the faintest praise earns a B-minus; are we to believe there’s no lousy power pop? (I’m here to tell you that is not the case; I’ve heard more than my share of dreadfully faceless, uninspired and hopelessly derivative music in the style.)

Nonetheless, Shake Some Action 2.0 is likely to find a welcoming audience. And readers who didn’t manage to lay hands on the original will indeed discover in Borack’s countdown some true gems. As always, though, decisions as to what is great and what is not often remain arbitrary. But if you must disagree with the author, please be gentle … lest you get mentioned in the foreword for Shake Some Action 3.0.