Composer, band leader and steel drum player Jonathan Scales maintains a busy and challenging schedule. In just the last two years or so, he’s toured internationally as part of the U.S. State Department’s cultural ambassador program, given a TEDx Talk, played at Victor Wooten’s music camp, and produced an album by his friend, musical associate and fellow Asheville resident Chuck Lichtenberger. Amid those activities, he made time to record his sixth studio album of original music — he celebrated the release of Pillar with a show at Isis Music Hall on Friday, Sept. 14.

Scales’ approach to writing music is a hybrid of composition with “moments of improvisation,” he says. He contrasts his method with the traditional jazz approach of playing the “head” or basic melodic line once, then allowing each band member to take a turn at soloing, and then restating the head at the end. “Every single tune of mine uses a different road map,” he says. “It’s more about what needs to happen in a particular moment to express whatever needs to be expressed.” 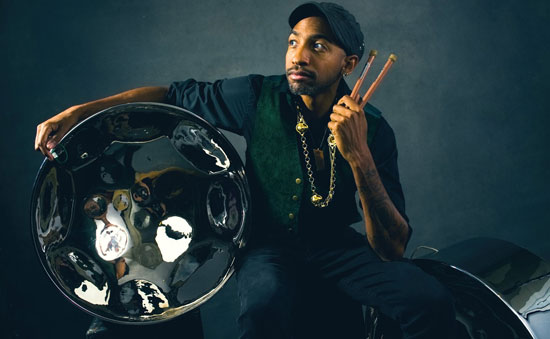 Pillar features a number of high-profile guest players including bassists Wooten, MonoNeon and Oteil Burbridge, Béla Fleck on banjo, saxophonist Jeff Coffin and percussionist Weedie Braimah. “I had the guests in mind before we went in the the studio,” Scales says. He composed with consideration for their styles: “How would I want the drums to play so that the banjo would fit nicely in there?”

The basic tracks for Pillar were cut over the course of a two-day session at Echo Mountain Recording. “I’d been there before doing [sessions] for other people,” Scales says. “But this was my first time recording at Echo for myself.”

With Scales on steel pans plus bassist E’Lon Bruce Jordan-Dunlap and drummer Maison Guidry, the approach was straightforward: “Record, record, record, record,” Scales says with a laugh. “And then at the end we came out and asked, ‘What just happened?’”

With multiple takes of each of Pillar’s eight songs from which to choose, Scales and his sidemen listened to the recordings and chose the best. Then — in separate sessions at other locations — the guest artists added their parts.

Scales’ signature steel drum sound is at the center of the Pillar recordings, but all the players shine. The band leader cites Thundercat, John Cage, Stravinsky and Johann Sebastian Bach among his wildly diverse influences. But he says that with his new music, he aimed for the cinematic quality found in the work of Danny Elfman. “The Nightmare Before Christmas soundtrack was a big influence on me during the writing process,” Scales says.

“Once you make an album, you usually realize things you wish you had done differently,” Scales says. But as the release date for Pillar approaches, he doesn’t feel that way at all. “This is the culmination of the last 11 or 12 years of my career,” he says. “It is what it is, and I love it as is. I wouldn’t change anything.”

One of Pillar’s standout tracks is the nervy “How to Rebuild Your Battleship.” After a careening steel drum melodic line — one so precisely executed that it feels like a sequencer program rather than Scales and his mallets —the tune features a stuttering, insistent and menacing bass break reminiscent of “Indiscipline,” a mid-1980s King Crimson track. The two textures contrast sharply but exist in a kind of skewered harmony. That tension between coexisting elements is a key characteristic of the album as a whole.

For Scales, who turns 34 the day of the hometown show, change is a creative catalyst. “A lot of life changes — moving to different houses, relationship things — inspired the album,” he says.

And as he faced those events, ones that psychologists agree are among the most emotionally traumatic, he says he has felt the need to be strong. “It might be a subconscious thing,” he says, “but I feel like I’ve needed to be stable for everything and everyone around me: a pillar.”

Scales continues, “I’m not saying that I make everything happen, doing this, doing that. But it’s something that I thrust upon myself, trying make sure everything is taken care of. And when things are overwhelming and approach a breaking point, using that same pillar analogy, there were times when there was too much weight that I was trying to hold.”

While that subtext may have served as a creative engine in the making of Pillar (credited to the Jonathan Scales Fourchestra), the music has an uptempo, playful and adventurous exuberance that belies such weighty notions. Emotion does provide the spark for Scales’ music writing, but he says that, in the past, he has applied it in a detached fashion. “On the songs I’ve released before, I would sometimes come from a more technical place,” he says. “There was always emotion behind it, but there were always techniques that I wanted to try out … things like that.”

Scales adds, “This time, I started with the emotional parts, and then used my techniques to try to put them across.”