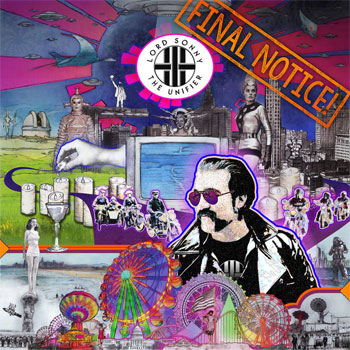 With a title like “The Starman,” one might expect a song that bears a passing similarity to the music of the original Starman, David Bowie. And in fact that’s not too wide of the mark; the opening track on Final Notice!, the new album from Lord Sonny the Unifier. Lead singer and guitarist Greg Jiritano’s voice favors Mott the Hoople’s Ian Hunter more than the Thin White Duke, but the cool, swaggering and gritty streetwise vibe of Bowie’s early ‘70s work informs the music.

Elsewhere, “The All New Know Nothings” (perhaps a comment on the current-day MAGA crowd?) sounds and feels musically very much like Bowie’s work circa The Rise and Fall of Ziggy Stardust and the Spiders from Mars, but the band is possessed of enough personality to steer clear of fetishistic hero worship.

Occasionally the song titles suggest that the Brooklyn group spends just a little too much time focusing on the man who fell to Earth, but while the songs themselves evoke Bowie’s spirit, they never sound like ripoffs. Put another way, this band isn’t likely to earn the nickname Greta Van Bowie.

Jiritano’s sinewy lead guitar does recall Mick Ronson’s work, but in the context of the original songs on Final Notice!, it sounds modern … or at least timeless. Judicious use of Mellotrons and stacked vocal choruses help position Lord Sonny the Unifier with one foot firmly in the present, and the other on (shall we say) Mars.