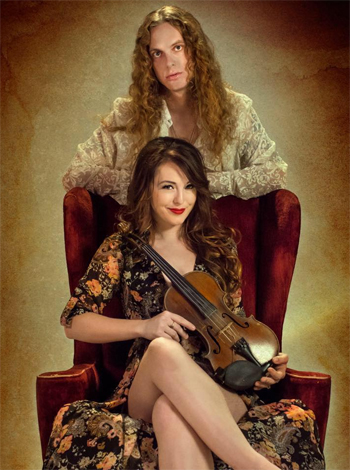 Led by husband and wife Tony Tyler (guitar, vocals) and Dani Jaye (violin, vocals), St. Petersburg, Florida-based Come Back Alice plays high-energy rock ‘n’ roll that evokes the best of arena-rock concerts of decades past. Come Back Alice is the headliner at the August 17 installment of Hendersonville’s Rhythm and Brews concert series.

You have the energy and appeal of a jam band, but with more of a focused instrumental approach. Do you intentionally aim to bridge styles?

Tony: We do a lot of improvisation on stage, but we also like to focus on songs. There is a difference between a jam band and a band that jams.

What’s the story behind your band’s name?

Dani: We have a 1971 Volkswagen bus, and her name is Alice. When we got her, we didn’t realize how much upkeep really kind of went into an old vehicle. Whenever we put time into fixing her up, we would always say, “Come back, Alice!”

The track “Live it Up” from your self-titled album has a fun lyric and an irresistible groove. When you’re writing songs, what comes first: the melody, the words, or that groove?

Tony: It depends on whatever the universe wants to give at the time, really. Dani and I write songs together, and we never really say, “Hey, let’s sit down and write a song today.”

Dani: The driving force is inspiration. Sometimes songs come all at once; it’s almost like they’re downloads. Typically those are some of our best songs.

Did you start playing music together and then fall in love, or vice versa?

Tony: To be honest, it was simultaneous. I was in Bradenton, Florida, cutting a solo album. Looking for something to do one night after a session, I went to a place called the Joyland Country Music Night Club. Dani was the – I guess you’d call it – utility player in the band. I saw and heard her and I was knocked out. I jammed with the band that night. My pick-up line was, “Do you wanna come play some fiddle on my album?”

Dani: It was a simultaneous attraction.

Come Back Alice’s music sounds like the soundtrack for a party. But what do you do when you’re in front of a crowd that doesn’t “get it”?

Tony: We win over crowds by any means necessary! We never play the same show twice, ever. So it’s a “one night only event” any time we come around. In addition to our original songs, we have a couple hundred tunes we can pick from. We don’t have a stringent set list, so we have the ability to say, “Okay, well if you’re not responding to this, then maybe you’ll respond to this.”

Clearly you both put time and effort into how you present yourselves visually onstage. How important do you think non-musical things like that are to a good show?

Dani: Of course people see with their eyes, and they hear with their ears. When we’re up there onstage, we’re musicians first, but we’re entertainers.

Tony: I think it’s important to give the crowd a complete experience. Otherwise we’re just some people up there playing songs at you.