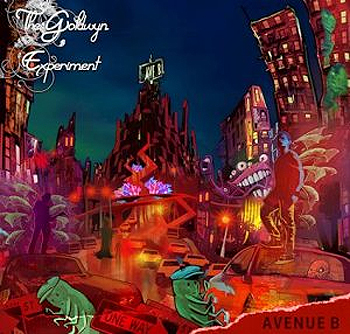 An elegiac piano melody, “Prologue,” kicks off the album, with a feel not totally removed from Jim Steinman’s Meat Loaf-era work. It’s subtle assured and inviting. Toward the end of a track, a yawning cello takes over, establishing a more unsettled vibe. All of that leads the listener unprepared for “Vodka Tea,” which seems to draw from ska and Eastern European rhythms; the tune’s bridge veers tentatively into progressive rock. The skittering drum pattern of “Bag of Nails” leans in a sort of dance-funk styled hard rock; it’s the most conventionally rock-oriented tune so far on Avenue B.

“Sad Boy Summer” kicks off with a similarly rocking feel, but quickly shifts gears into a hp-hop piece with a standard-issue (but not at all bad) rock backing. “Fast response” is dramatic, nearly over-the-top art-rock.

Things continue in that manner, jumping from style to style, seemingly at random. “Interlude” is a lovely jazz trio piece that may lead listeners to think Avenue B is a various-artists collection. “Whale Jail” has Latin flavors (no, really). “Arrows” is a pop ballad. “Let it Snow” is the first tune that sounds much like anything else on the album; it combines the jazz and pop styles of the two songs that came before it. It’s also among the best thing on the whole album. “Queen of the Night” is more drama and atmosphere. The set ends with the complex, ambitious and delightful piano-led jazz of “Epilogue.”

I understand what the artist is going for here — a kind of autobiographical musical travelogue — but from a listener’s perspective, Avenue B doesn’t seem to know what sort of an album it wants to be. It’s easy to imagine any given listener enjoying three of four cuts here – maybe the jazz tracks, perhaps the rockers or ballads or ethnic excursions – but it’s exceedingly difficult to imagine many people staying along for a ride along the entire length of Avenue B.